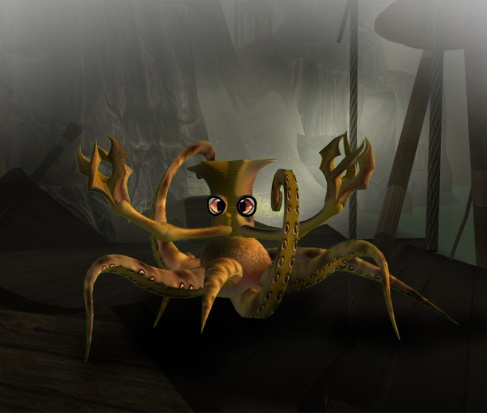 The H.P.Lovecraft Festival is in full swing right now.  It’s time to embrace your inner Elder God, and play in the bay where Monsters are allegedly hiding.  You’ve marveled at Cthulhu, as he shrunk himself to become one of the most popular non-breedable pets on Second Life.  You may have run into an occasional Deep One avatar lurking in the swamps of Arkham.  You may have danced at Miskatonic University as Arkham burned. Heck, you may even have hung out at the Saturday dances in Dunwich at the Village of Nyght from time to time.

I hope you plan to join us this Saturday (Sept. 29 from 6-8pm slt) because the little critter pictured above is the latest shoulder pet from Avatar Bizarre, and it’s being given as a prize.   The party is located here:  http://maps.secondlife.com/secondlife/Dunwich/41/206/42

Nyarlathotep is known as Crawling Chaos, and is a malign deity.  He first appeared as a “tall, swarthy man” but later manifested as a tentacled monster.  Now, he’s available as a shoulder pet for anyone into surrounding themselves with Eldritch Horrors.