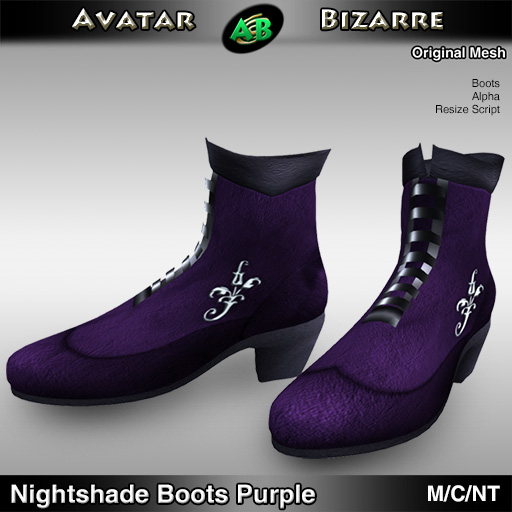 As I sit here during Stormageddon 2014, which has dumped half a year’s rainfall on Northern California, yet is still just “a drop in the bucket” for ending the drought (can I sucker punch those news talking head people for saying these things?), and a very sleepy cat in my lap wearing the Cone of Shame, I believe it’s time to let you guys in on some more sneak previews and whatnot.

Gothmas by Gaslight will begin on December 15 on The Cursed Sim in Second Life.  A landmark will be forthcoming, just as soon as it’s released.

Avatar Bizarre has a number of brand new items coming out for Gothmas, including these boots.  Nightshade boots are available in a bunch of different colors including traditional Goth Black.  They’re unrigged, which means you can resize them as needed.  These are great for men and for women, and will hopefully fit under a variety of different creator’s pants legs.  Cost is 99L/pair.

Horrorfestive has begun.  You can find it located >>> right here <<<.  This is a charity event, designed to help raise money for a very wonderful person, who is suffering from a rather insidious debilitating condition.  You can read about it here.

Avatar Bizarre is a late addition to the festival.  I saw the word go out that the organizer was looking for someone to fill in for another merchant who had to back out at the last minute.  The requirements for the festival stated at least one new item was needed for a 100% donation to the charity.  Luckily, I had been hard at work on another pair of boots.  So…Introducing the PANZERMENSCH boots!

These are unrigged boots, as well, and are available in seven colors.  Please talk to me privately if you’re interested in the rigged version.  The cost on these is 99L/pair.

And then there was Twisted Krissmuss (you can find a list of participating merchants and slurls here).

I’ve already talked about the Really Abominable Snow Beast,   But what you may not know is I’ve made a stunningly Christmassy gown.  It’s rigged mesh with a fitted mesh version included, and it’s available in several colors.  Introducing the Noelle Gown, which is transfer, and only 100L for the duration of Krissmuss! 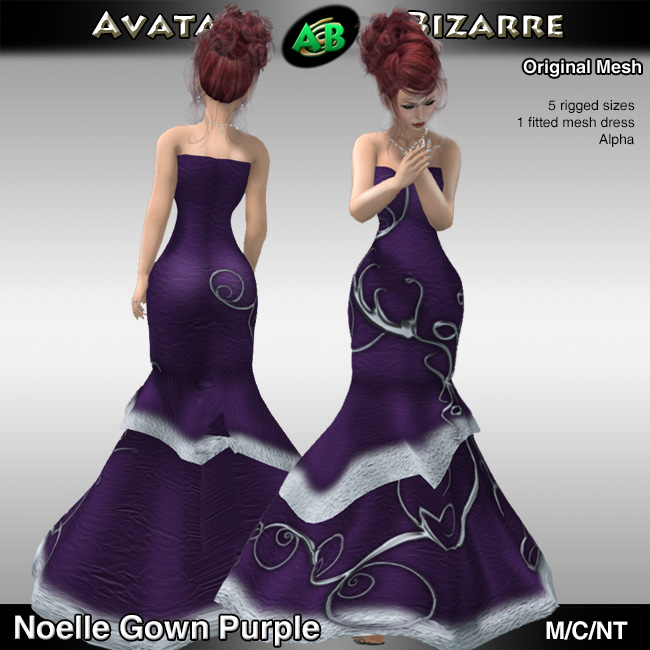 I think this is about it for now.  Enjoy your holiday and stay tuned for more fun stuff to be announced!