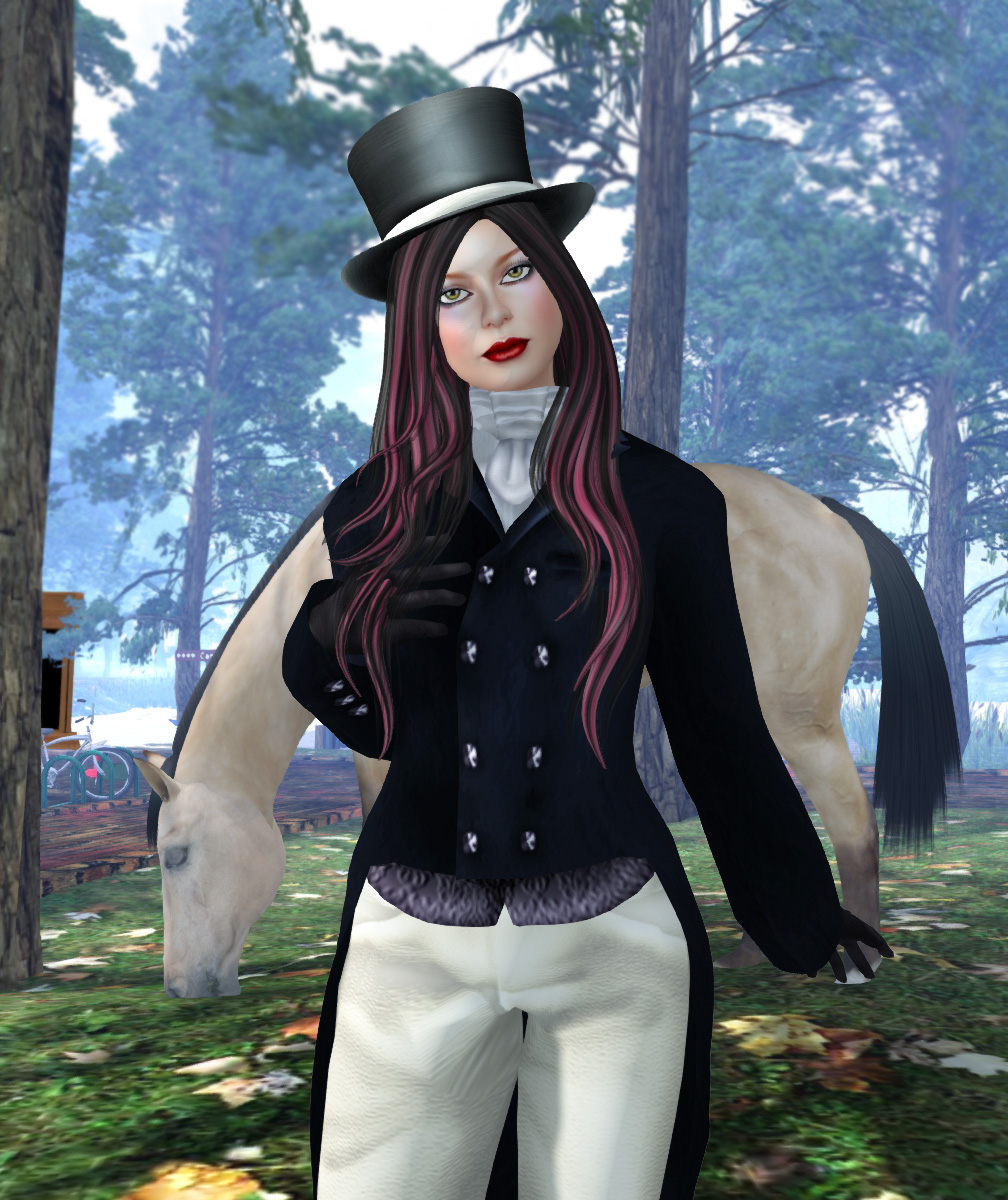 I had made a Dressage outfit by request some time ago.  It was a partial mesh outfit – really just the rigged coat, plus a hat and cravat.  The rest was all system layer clothing.  At the time, it was only available for male avatars, but as my skill in mesh modeling has grown, so has the selection at Avatar Bizarre.  I was recently asked if I could make a female version of this outfit and, like all so-called “easy” projects, this just sort of spiraled into a major undertaking involving lasers, duct tape, a disused space station, and a fractal black hole.

Not only did the female version happen, but SLink and Omega clothing appliers were added for the system layers, so mesh body enthusiasts can throw on a Dressage outfit.  To make this even more up to date and amazing, the coat is now on a color change HUD and includes all eight colors previously available for this outfit.  What would you pay for such a fine set of Ginsu knives?  Don’t call yet, because there’s more!  The original system layer pants were all black, but matched the suit color via piping down the outside leg.  Each color, plus a plain white pant is included in the SLink and Omega HUDs.  For those die hards who don’t wear mesh bodies, there’s a fine collection of system layer pants (on the underpant layer) in all colors.  The shirt (white) and gloves (black) are on the HUDs and are included as system layers as well.  Completing this set are the unrigged hat and cravat, and coat alpha.

Just to make it even more fun, there are six sizes in the collection, including a flat chested femboy size (for femboys, child avatars, and furries).

Then, because I’m not one to let a project go without fully embracing the improviness of it all, the male version was reuploaded for a better fit on the different male avatar sizes.  Of course the male version got the same treatment as the female version (noted in the previous blog post).

It’s exciting!  You can get this on the Marketplace for now.  Inworld access will happen very soon.

Because it’s fun to include the odd song lyric, have some Echo and the Bunnymen:

“Billy stands all alone
Sinking sand, skin and bone
Bring on the dancing horses
Wherever they may roam
Shiver and say the words
Of every lie you’ve heard” – Echo and the Bunnymen