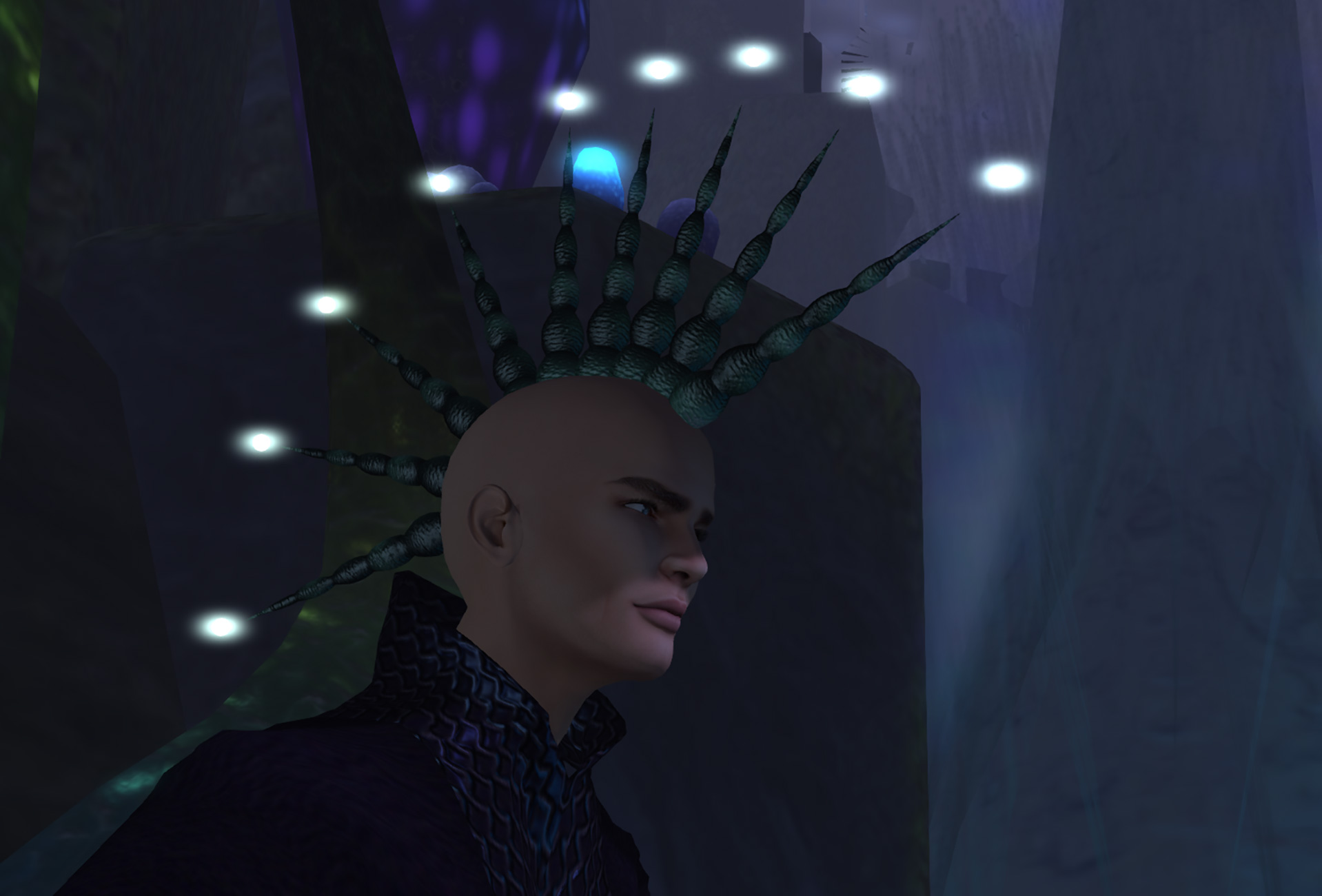 One of these days, I will learn how to make actual hair.  Until that happens, here’s a fantabulously epic Mohawk.  This bad boy is called “Unihawk”, and fearures a color HUD with seven colors, including white for those who like to do a bit of tinting.

You see those little balls?  It’s okay if you don’t want them to glow.  You can simply right click, edit, then hit edit linked parts, and select the balls.  You can tint them, make them glow harder, or not at all, and you can even make the Mohawk fullbright, if that’s how you want to rock it.  Heck, if you want, you can even remove the balls from the Mohawk, but you’d need a place to rez it.  So whatever you wish to do, have fun doing it!

Materials have been applied to this creation, so it’s quite literally shiny and new.

Check it out at the Marketplace or inworld. 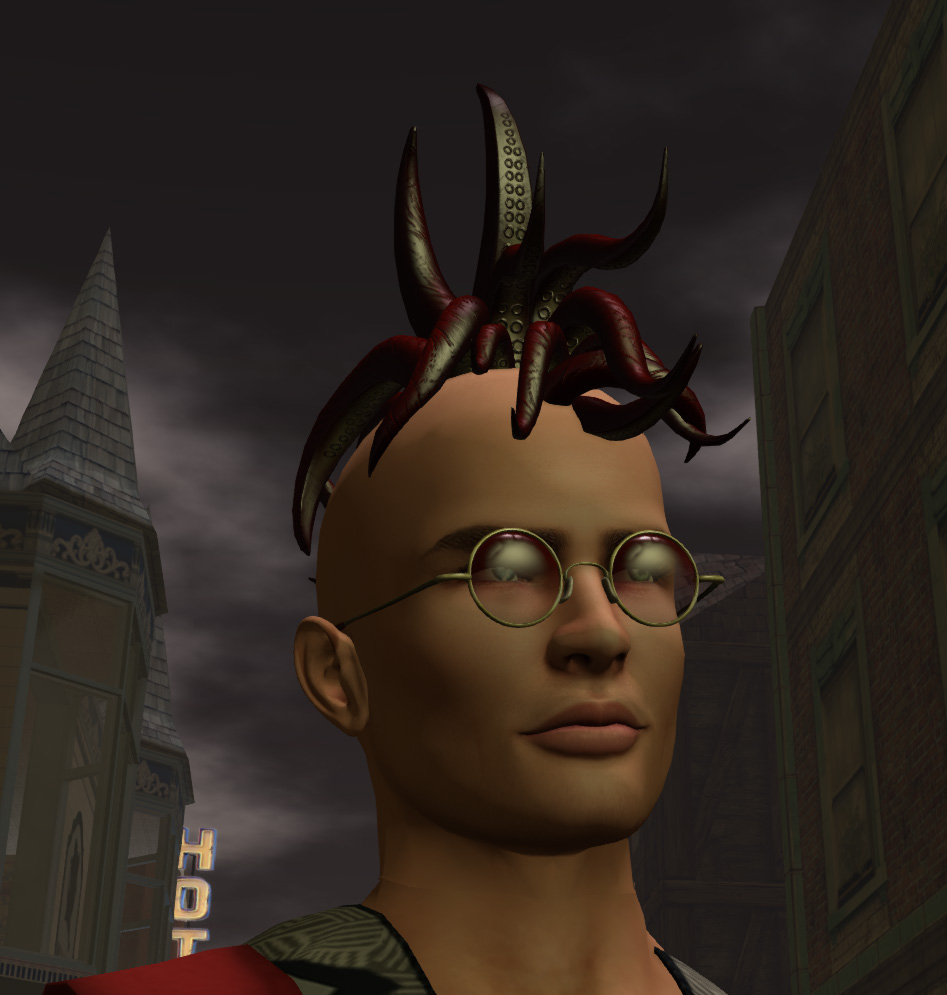 Sometimes inspiration hits, and you end up making something that kills a few birds with a single well-aimed rock.

One day I was lamenting the lack of a decent mesh mohawk in my inventory. Yes, yes, I know I can go places and get things that might work out for whatever look I’m randomly striving for, but where’s the fun in that? Besides, with as much random weird stuff as I’ve made in the past, it was a natural progression to attempt “hair”.

I’m quite proud of this thing. For one thing, it’s my first successful attempt at “hair” in Second Life. Then there’s the whole slimy and moist look achieved with materials. No self-respecting Punk should be without a good mohawk, don’t you think?

This bad boy is modify and copy, and includes a color HUD with six colors to choose from. It’s about as unisex as you can get in Second Life, but if you aren’t sure, there is a demo you can try on.

Available inworld and on the marketplace.

“I blame Society.  Society made me what I am…” – Duke, Repoman

And with those famous dying last words of the penultimate mohawk wearing film antogonist, I give you the Spizzenergi ensemble from Avatar Bizarre!  You too can revel in the styles of a bygone era; an era steeped in a crazy and rebellious subculture.  People listened to three chord bands, often discordant, more often than not, hardly able to play their own instruments without a sneer and flailing.  It was a time when you could change your name to Seeth Ransom or Jed Horrid, and create your own bubble of anarchy in a rancid system of broken society and failing governments.  You could dance to your favorite bands, like Dead Kennedys, New York Dolls, Dead Boys, and the Ramones.  You lamented the loss of Johnny Thunders and Sid Vicious.  You rammed safety pins in your nose and leather jacket.  You were a Punk Rocker, and Anarchy reigned supreme.

Named for a band from the late 70s/early 80s (that changed its name every year), this ensemble is 100% rigged mesh, and is available in both male and female versions.  For both genders, the pants and the tank are sold separately, and both come with a color change HUD with six choices.

The tank declares:  “PUNK’S NOT DEAD.  It was bitten by a zombie and now it wants to eat your brain.”

Want to know more?  Fine.  I’ll put on some Black Flag while you head over to the Marketplace or inworld to check things out.

Countdown it’s getting near to flight time
Night stars are shining in my eyes
Ma’ says I’m going to be the first one
To dance the be-bop in the skies!

Dancing in heaven, I never thought
I’d ever get my feet this far (orbital be-bop) – Q Feel, Dancing in Heaven (Orbital Be-Bop)

The Skydancer Shoes are here, and they’re ready to make you feel like soaring!  These 100% unrigged mesh shoes are the latest in Avatar Bizarre’s growing footwear collection, and feature a color HUD that gives you seven different color choices.  Along with the full spectrum, these shoes were built to accommodate the SLink male flat foot.  However, as these are modify and copy, you should be able to resize them for the SLink female flat foot.  With a little tweaking of size and position, these should also fit the conventional Second Life avatar foot.  Materials enhanced for your viewing pleasure!

Currently available on the Marketplace and inworld.

Are you ready for Summer?  Do you want to head to the ocean and cut some waves?  Even if you axe in a huge wipeout, you will be fully prepared in Avatar Bizarre’s new line of rigged mesh Board Shorts.  Made from the finest quality mesh, these shorts won’t shred, rip, or tear, no matter how many times you might get whacked by a wave.  Even if you’re just into lazing on the sand with your sweetie, or strutting around flexing your muscles, these shorts will set off your ripped frame in a most awesome way.

Though rigged mesh cannot be resized, most clothing at Avatar Bizarre is Modify, Copy, and no Transfer.  The board shorts come in the standard five sizes, plus an alpha, and are available in fifteen different patterns and colors.  You will have no shortage of choice here!

Available Inworld and on the Marketplace. Don’t be gnarly.  PLEASE TRY THE DEMO FIRST.  It’s free and transfer.  May fit some full sized mesh avatars.

It isn’t typical for Avatar Bizarre to post more than one blog article in a week, but this time there’s Punk Rock in the air.  I was just too excited about the release of the Oi! Punk Pants (rigged mesh), that I couldn’t wait another week to tell you folks about them.

Once upon a time, in a land far, far away (or maybe in your own backyard), there was born a movement.  This movement gave us simple, sarcastic, and often-times, angry music from Mohawk coiffed young people.  They rallied against oppressive government, the establishment, Disco, and Hippies.  Pretty much in that order.  Punk slammed into the music scene, bludgeoning us over the head with blunt bands like Black Flag, Dead Kennedys, New York Dolls, Oi Polloi, and a whole lot more.  As the infectious music caused Grievous Bodily Harm and various aural trauma, the style shown by Punk’s erstwhile members was a sight to behold.

Jackets dripped with zippers and band buttons, pants were plaid, and Safety pins were liberally applied!

Avatar Bizarre is thrilled to present the Oi! Punk Pants as a tribute to that bygone era when men were men, women were women, and the Status Quo quaked in fright at the Young People™ in Mohawks and Liberty spikes.

OI! You lot.  Look for these on the Marketplace or Inworld at the main location.  Don’t forget to try the DEMO first.