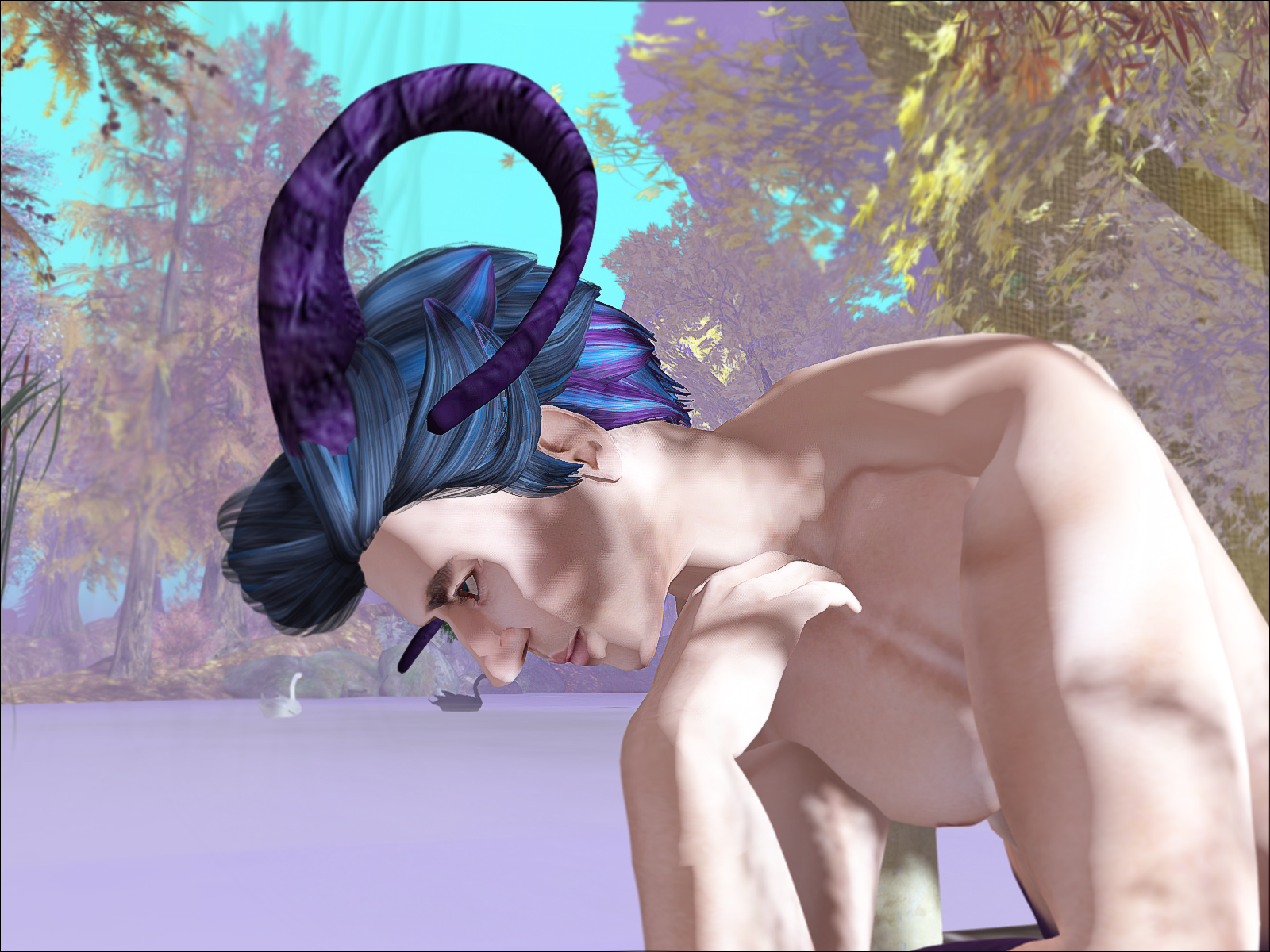 You know, it’s fauny, but occasionally legs happen.  Initially, Avatar Bizarre had a set of faun legs, with all the colors and gender things sold separately.  They were pretty good and all, but many things do well with some improvements.  Not only did these legs get a complete redesign, but several colors have been added.  Of course, I have always had a thing for purple, so you are about to get an eyeful of purple today.  Be wary, because this is what happens when the braining begins. 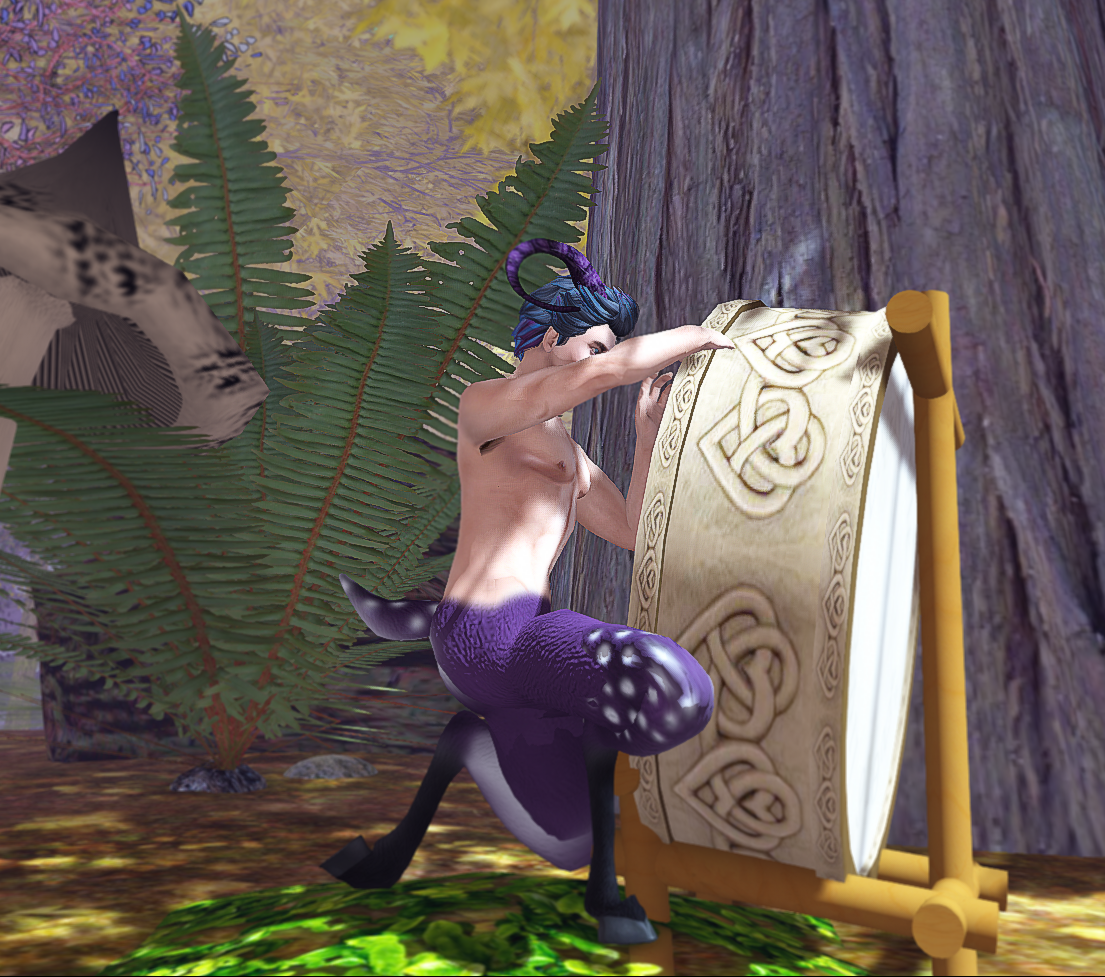 The Fallow Faun legs, named after the very cool looking Fallow Deer, are lightly spotted like their namesake.  If you’re going for a typical woodlands creature, spots are usually the way to go.  This generally helps you to stay camouflaged, just in case you run into trolls or orcs on the leafy trails.  Most of the time, you’re more likely to end up in a faerie ring, or smack in the middle of an abandoned Eleven drum circle.

Fauns, being of a musical bent, naturally play any instrument left laying around Elven campfires.  Enjoy the rockin’ beat as I play the Elven Bass Drum for you. 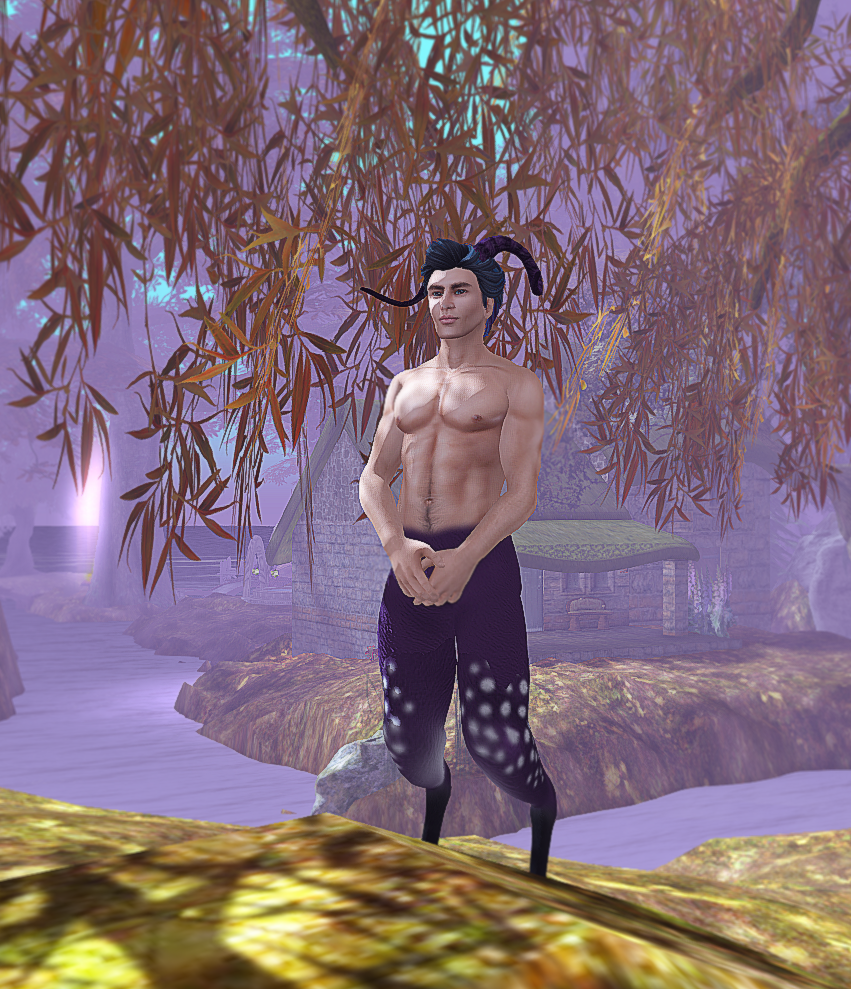 Let’s get down to the nitty gritty, shall we? Here’s what you get for your 275L: One set of male legs One set of female/femboy legs One set of large horns (on the color HUD) One set of smaller black horns Tail – one positioned for the male and one for female SLink and Omega appliers – on the tattoo layer Tattoo layers in all ten colors for the default Second Life avatar Color HUD for legs, tail, and large horns Alpha Lest I forget, there’s a box of Omega HUDs for those of you who wish to be materials enabled.  SLink HUD is materials enabled by default.  There’s also a handy note card explaining all the things. 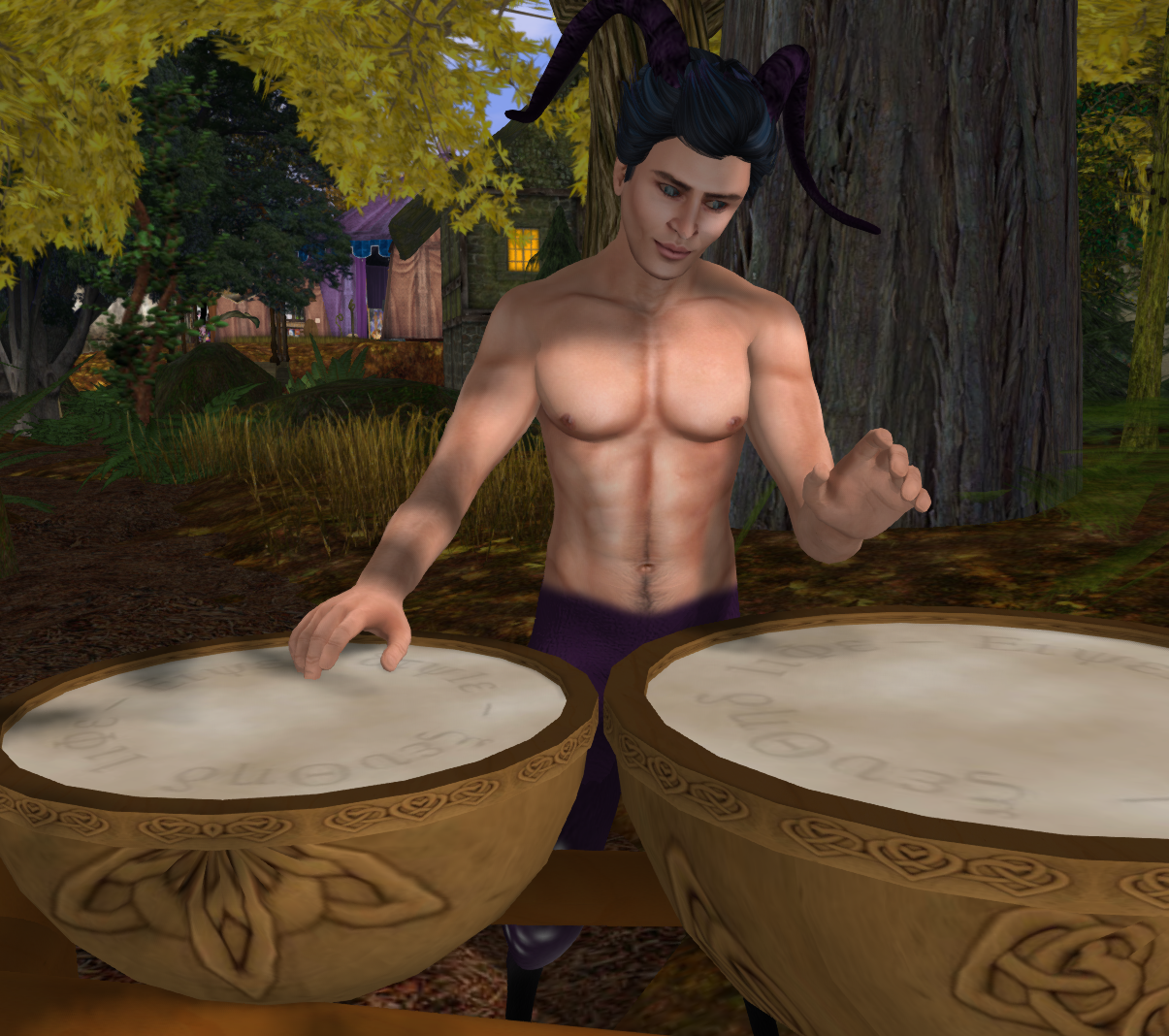 These can be purchased on the Marketplace and inworld at Avatar Bizarre.  Please try the demo first. 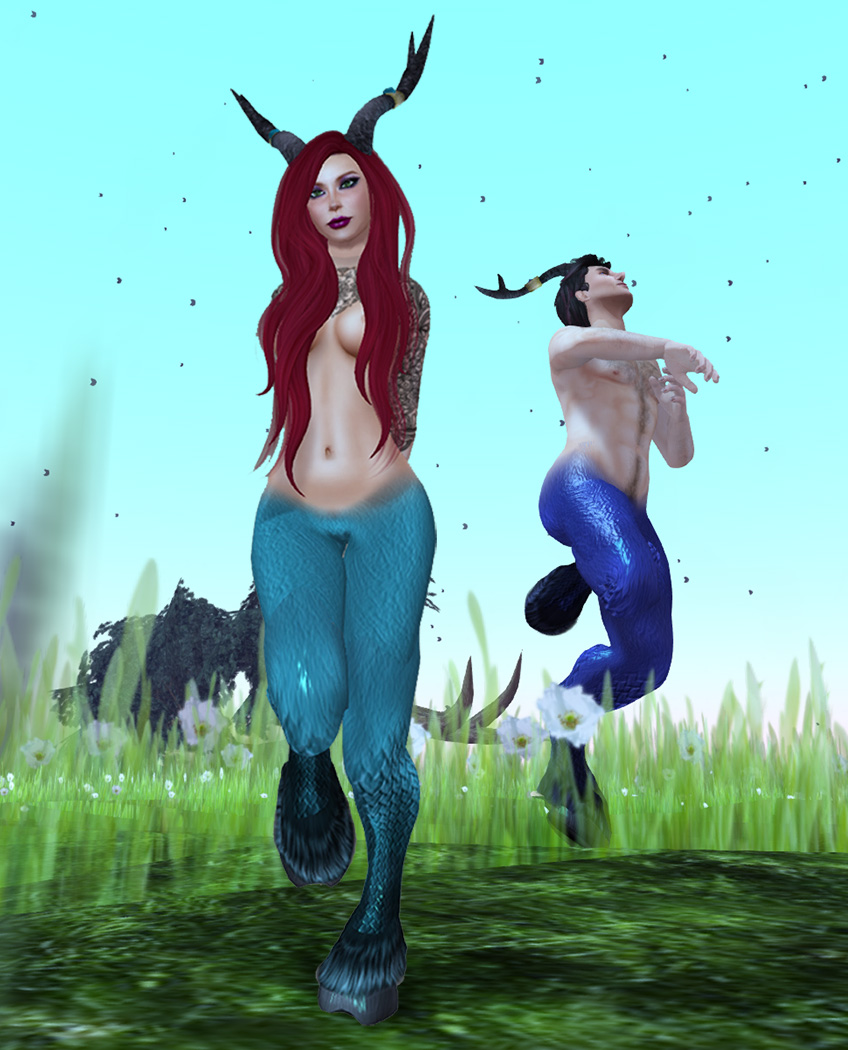 The Qilin – a rare and colorful creature in Chinese folklore. It is often called a Unicorn, but this is somewhat of a misnomer, since most Qilin (Japanese is Kirin) are depicted with two antler-like horns.  They are often associated with vibrant colors, gemstones, and the elements, much like the dragon.  Although the arrival of a Qilin is a good omen, they are said to punish the wicked, as well as foretell the birth of great men.  It has been said that the birth of Confucius was foretold by the great Qilin. The new Qilin legs from Avatar Bizarre are as jeweled and spectacular as any true Qilin.  These are rigged mesh, and fit most avatar shapes, though there is a demo available if you aren’t sure. 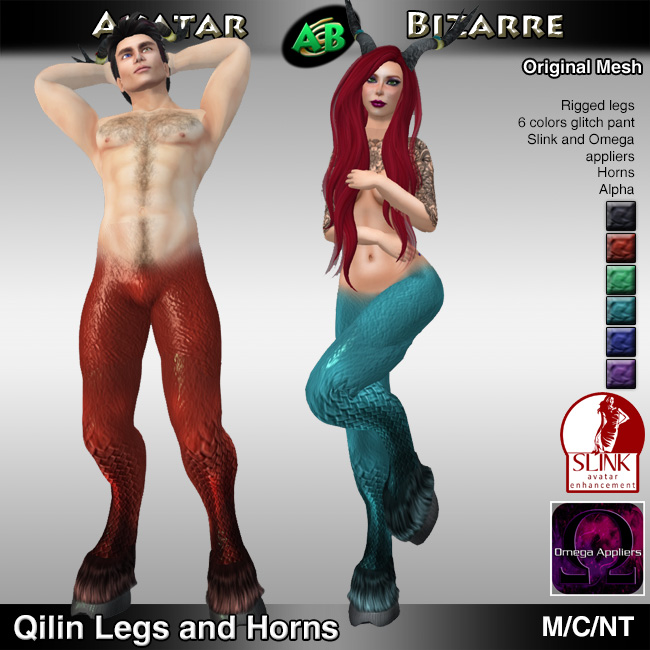 Now for the fun part!
You see that vendor ad?  It explains everything pretty well.  There are appliers for SLink (the underpant layer), and Omega appliers (same deal, only for other mesh bodies).  The color HUD controls the colors of the legs and gem on the horns.

If you don’t have a mesh body (SLink, Matrieya, etc), not to worry.  There are six tattoo layers in the different colors for the default Second Life avatar.  So we’ve got you covered!  Literally.

I did want to mention a couple of things about the new Male SLink Physique Body, which is what you see my avatar wearing in the two images above.

First, it’s really, very nicely done.  There are a lot of bodies out there for folks to try out. Some are more muscled than others, which is great for folks who want to be heavily muscled.  The SLink body is more lithe, slender, and has just enough muscle tone.

Second, the HUD that comes with the SLink body is very detailed, and works really well!  It includes an 80 point alpha HUD, a skin tinter, a Penis (Hah!), and all the bits and bobs you need to make regular mesh clothing fit.

And the clothing does fit!  All you have to do is use the HUD to alpha out the bits that poke through.

Third, the hands and feet (sold separately), no longer have a weird seam between wrist/ankle and the rest of the body.  There’s a head that comes with the body, but I prefer to wear my own head.  The skin maker I prefer has not made appliers as of this blog post, hence the neck seam you see, but I don’t have a whole lot else to complain about.  I’ve heard others saying the pecs are a bit high, but I can live with that.  Because..

The legs are available on the Marketplace and Inworld.

So there’s been a lot of Goating going on, and we’re not about to nip this one in the bud…or should I say Cud?  There’s a whole lot of faun in wearing furry little goat legs, so I decided to take a trip on the Fantasy Express, and made a set of goat legs for both men and women in Second Life.

It’s pretty easy to slap on a set of digitigrade legs and trip the goat fantastic.  The nice thing about playing my own version of Mr. Tumnus, is I have nothing to fear from the White Witch.  I can simply teleport away.

The Faun legs from Avatar Bizarre are the latest in a long and growing line of mesh goodies.  Available in both male and female versions, as well as six natural colors, there’s a great option for custom colors, if you want them.

All you have to do is contact Sredni Eel either inworld, or via email.  The whole faun package includes the rigged legs, unrigged horns and ears, a furry upper body layer, a glitch pant, and the requisite alpha to hide the non backwards facing bits of your human avatar’s legs.

The great thing about being a faun is nobody expects you to wear pants or shoes!  So rejoice in your goaty full monty, and get your goat on!

On the Marketplace and Inworld.