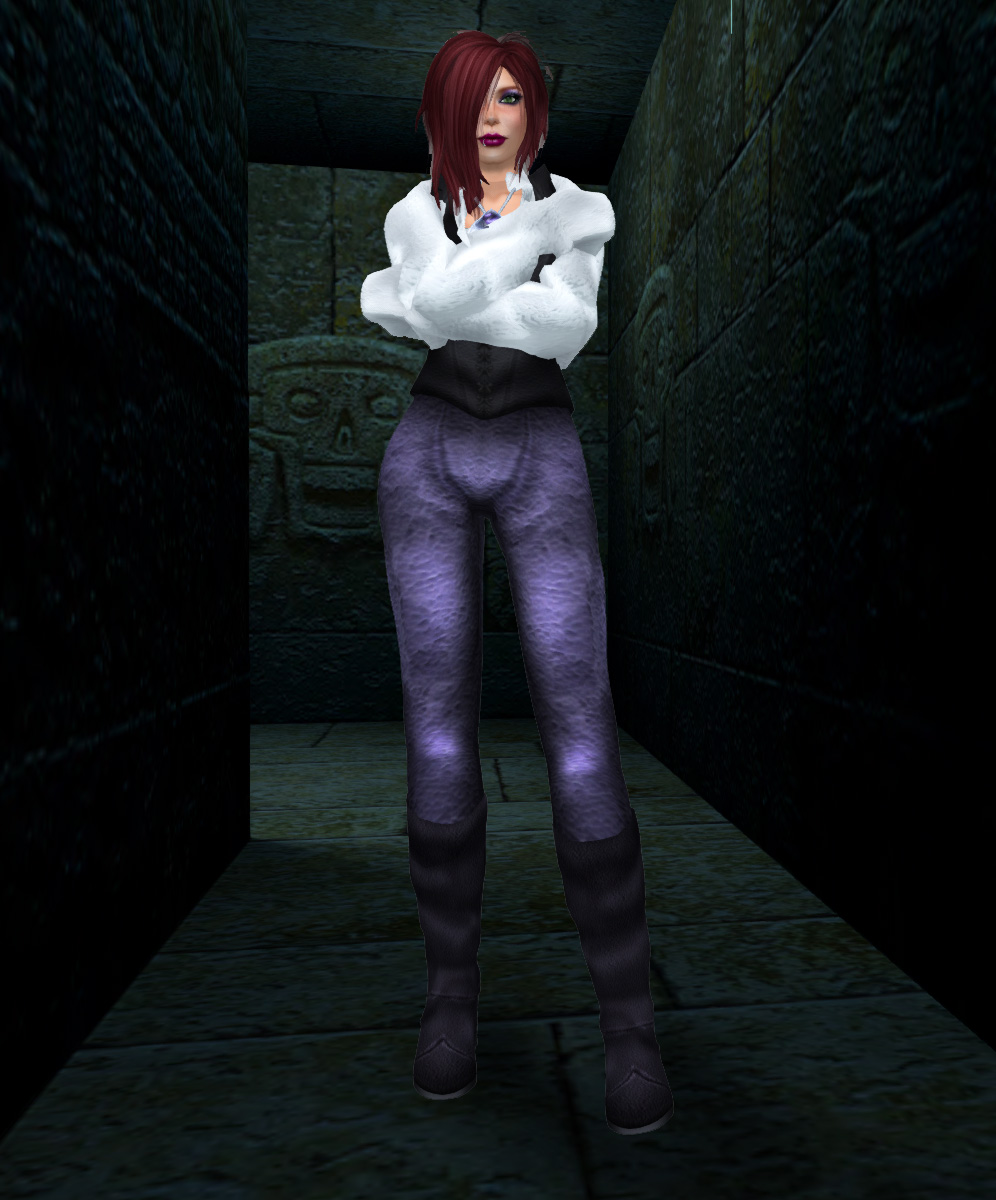 Jareth, the King of Goblin City, rules over the Labyrinth.  He is an imposing and magical figure, surrounded by all the fantastic creatures in the World of Labyrinth.  He has all the power he needs, commands a host of sycophantic goblin folk, and has some mad talent for singing and dancing.  Yet he lacks the thing he craves most:  The love of his life.  He sought to please her by taking away her troublesome baby brother, then offered her thirteen hours to find her way through his Labyrinth to his castle in the center of Goblin City.  He reordered time for her.  He did all she asked.  In the end, she rejected him, and he flew off as a great Barn Owl. 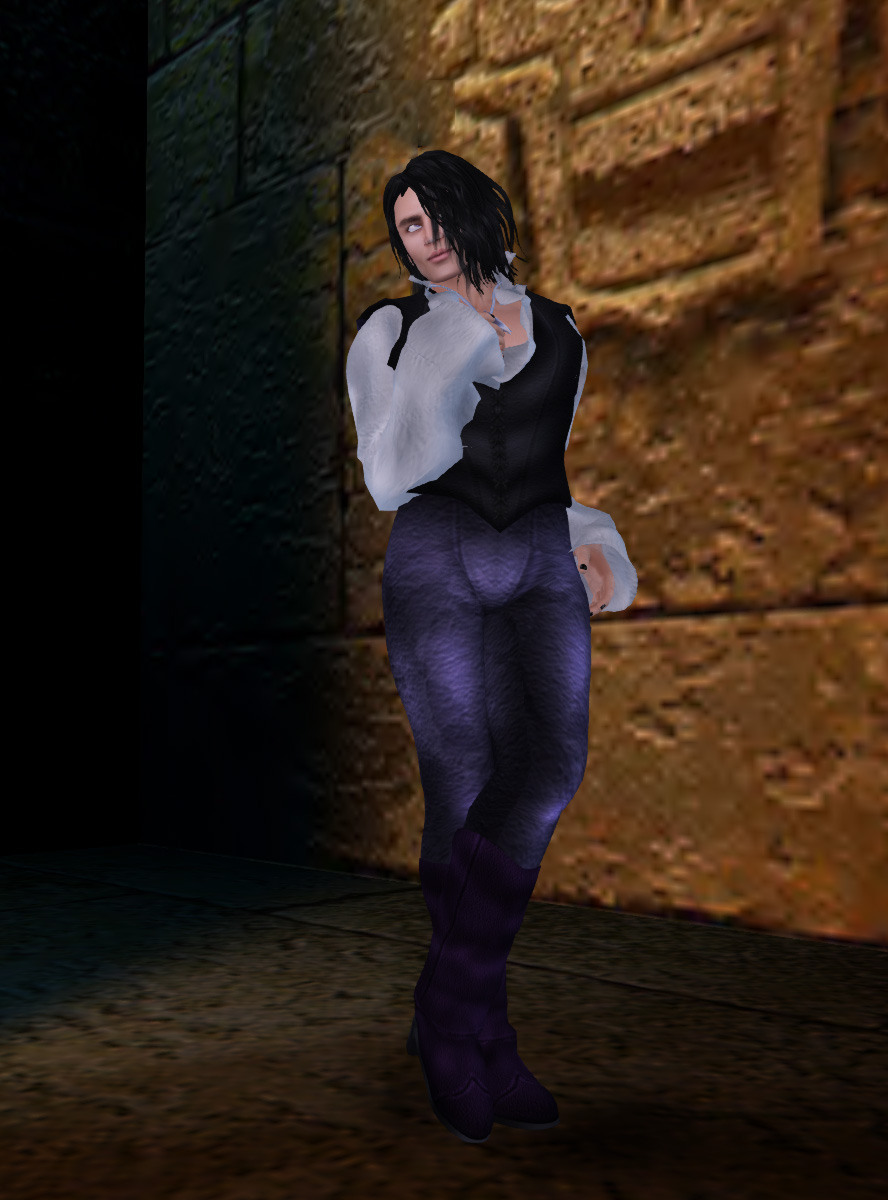 As perpetrator of Avatar Bizarre, I get my inspiration from a variety of sources, and this outfit is heavily inspired by what David Bowie wore during the Magic Dance scene.  The rigged mesh outfit comes with the standard five sizes for both men and for women, the crescent moon pendant, and a color HUD that changes the colors for both outfit and pendant separately.  The HUD gives you six colors to choose from. 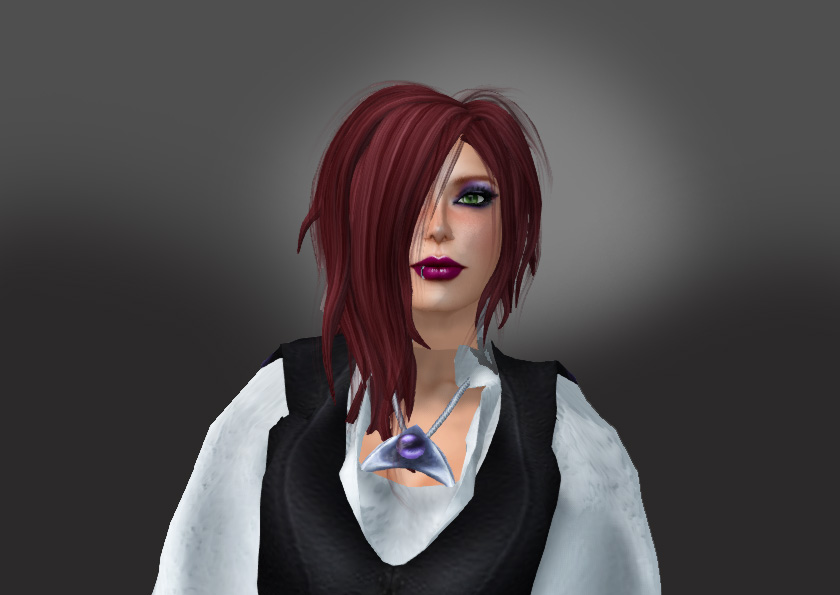 The boots for this outfit are sold separately.  There’s a male version, and a female version (male is simply larger than the female version).  The boots include a color HUD with six colors, as well as being materials enhanced.

All of this stuff is available inworld and on the marketplace.

Avatar Bizarre has, by some amazing circumstances, and a bit of applying, made it into this year’s Second Life Fantasy Faire, an event created to raise money and awareness for Relay for Life.  To be fair, there have been a couple of sneak previews as yours truly jumped the gun and started making stuff just in case.  Enthusiasm, coupled with that elusive Inspiration has resulted in a few new things.

You already got a sneak preview of the Goblin King and the Boudica Armor.  Now let me give you a taste of the Goblin Queen!  Of course this is mostly because my lovely model (pictured above and below) is champing at the bit for a picture or two.  The Goblin Queen, like the King in a previous post, is going to be available in seven colors and includes the pants and jacket (plus alphas) and shoulder armor (one shoulder).

If you’re itching for just the jacket, don’t worry!  The jackets for the Queen and King will be available solo with a Color change HUD (all seven colors), plus the shoulder armor and requisite alpha.

In other news, there’s a set of boots for both King and Queen available.  The boots will include a rigged and an unrigged pair, plus Color change HUD.  All pieces in the ensemble are materials enhanced. Demos will be available for everything, so please feel free to try them out!

My friends all know I have a borderline stalkerish admiration for David Bowie.  Every time he’s visited my area for a show, I’ve gone.  Sometimes multiple times for the same tour.  The music collection includes something like 800+ songs – versions and reversions, covers and originals, live and studio…legitimate and bootleg recordings of all things Bowie.  Heck, there’s even some Iggy Pop, Lou Reed, and Mott the Hoople in the mix for good measure.  Then there’s the fact that Bowie’s appearance in Zoolander makes me giggle every time I see it.  But then, I laugh like a little kid at Family Guy, but I digress…

In short, I consider David Bowie to be a demigod of some sort, and possibly an alien with photogenic superpowers.

So it should come as no surprise that some of the designs at Avatar Bizarre should be pretty heavily influenced by Mr. Bowie’s extensive wardrobe.

So, without further ado, and with much aplomb, I give you an advance look at the Goblin King!  This is a rigged mesh outfit, which consists of jacket and pants.  The boots are from the Panzermensch collection at Avatar Bizarre, but I have no doubt that quite a few tall boots should work pretty well with the pants.  And here’s the really good news:  If you don’t want the entire outfit, the pants and the jacket will be sold separately, just in case you want one or the other, but not both.  In even better news, for my female friends at least, there is also a women’s version available.  So you can put down those pitchforks and torches.  The lynching is completely unnecessary, I assure you!

The pants/jacket combo will be available in seven colors, and include an alpha for both pieces, plus full perm alpha textures just in case you want to work on your own set of alphas.  Standard sizing applies, and there will be a demo available.  Oh and lest I forget, it’s all materials enhanced, so yeah.  There’s that too.

Now for the bummer news:  This outfit will debut at Fantasy Fair in Second Life (which starts in April), unless I don’t get in, in which case it will be released my mainstore location and on the Marketplace in April.

Pictures of the female version will be posted here as soon as things are textured, and my model becomes available to pose for pictures.