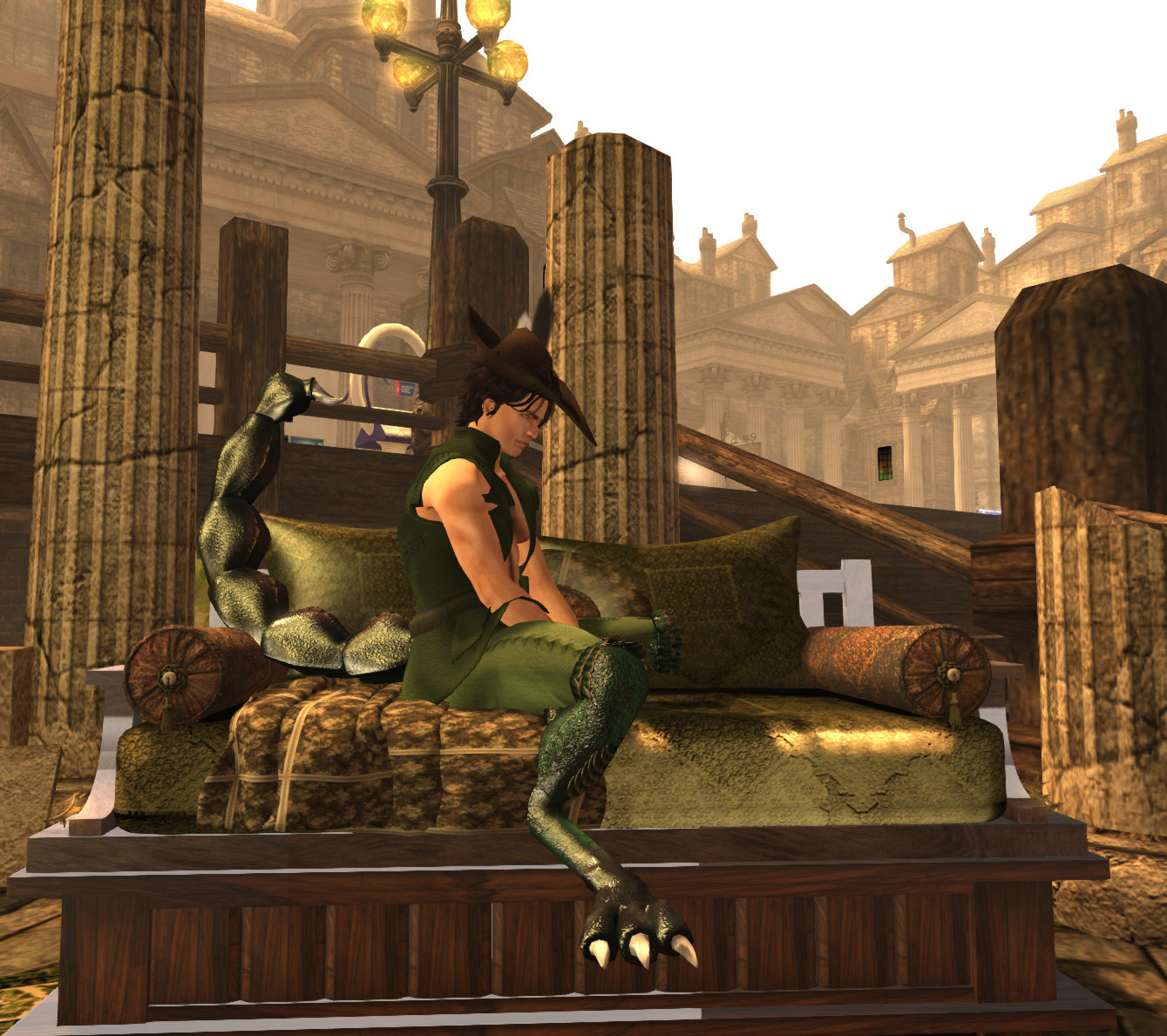 After wandering through the dark faerie land of Otherworld, I decided to head back to Lucentia for a bit of a rest, and to collect my bearings for the next tour of this fantastic Second Life event.

Lucentia is more subdued than the other regions, but no less spectacular.  It is nestled on a quiet meadow, and is awe-inspiring in its sheer magnitude.  Greek Ionic columns tower mightily above a shimmering lake.  An electrifying giant crystal glimmers just off the water’s edge, inviting you to bask in its dazzling glory. 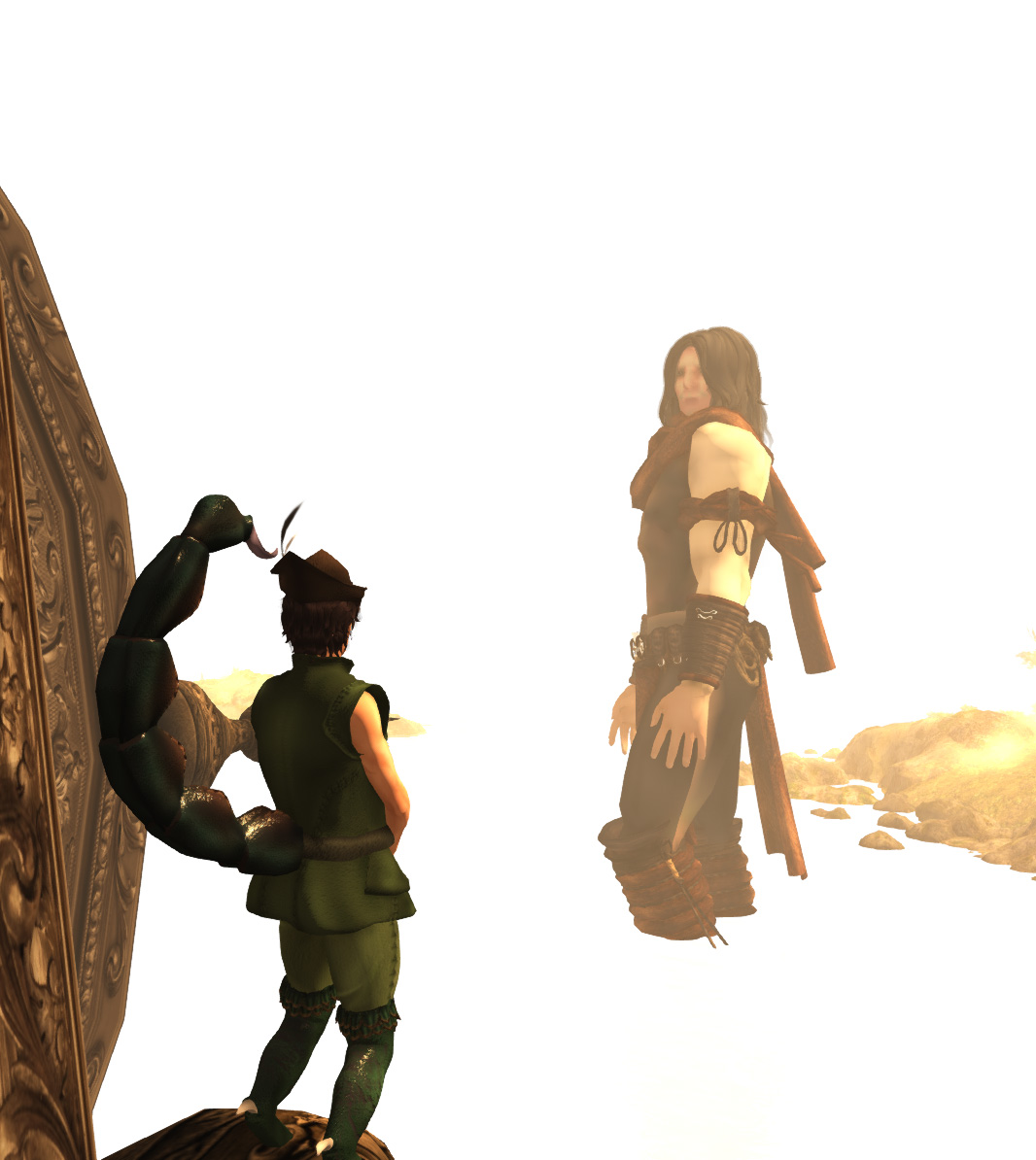 As I moved away from my resting spot, I flew up to the crystal and was spotted by a Titan.  I’ve seen a couple of these giants moving across the Fairelands, but didn’t get too close…until now.  We ended up on the same walkway, but he was nice enough not to squish me under those gargantuan boots.  Thank you, Mega Man! 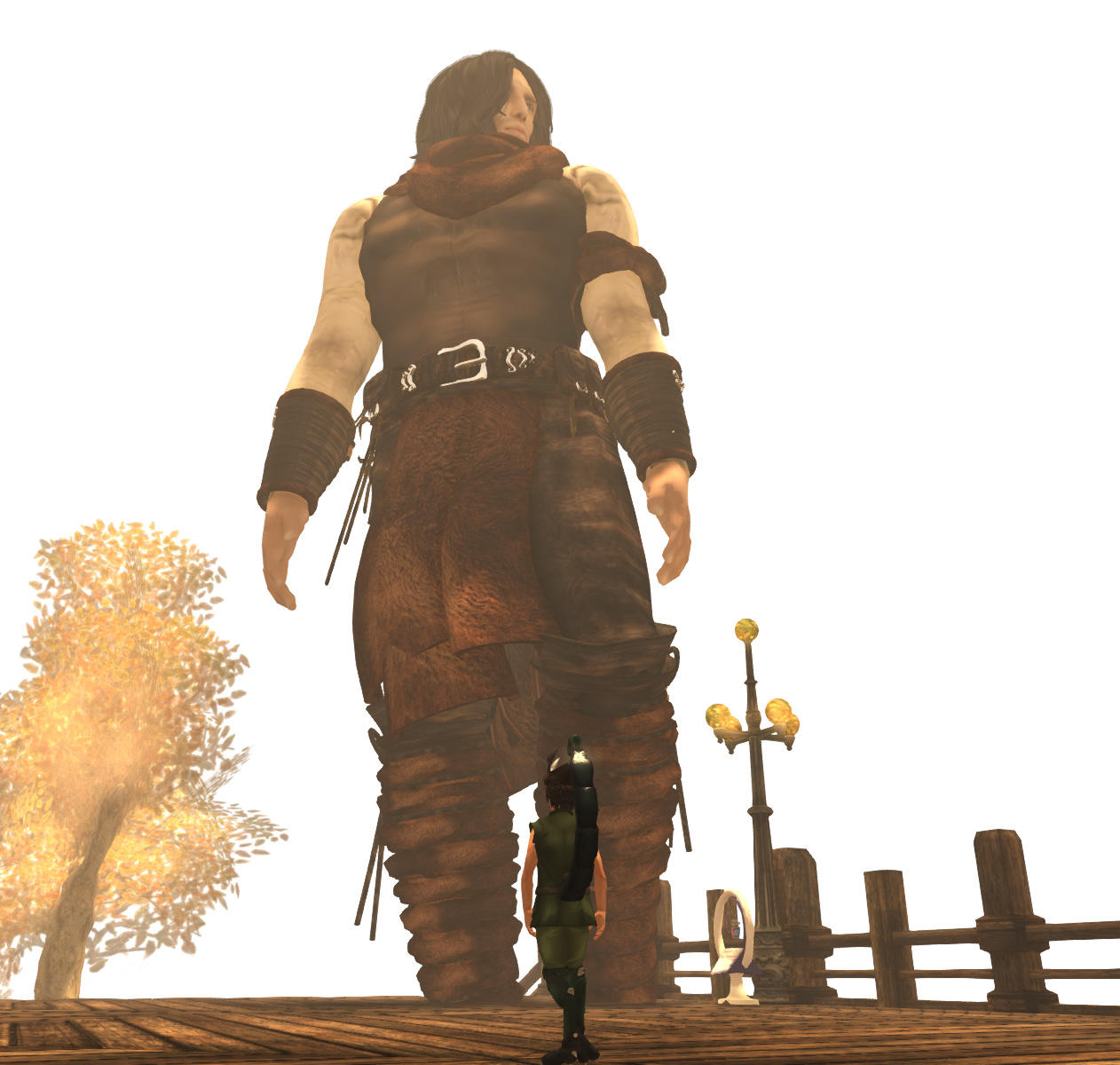 He is rather a nice fellow, so if you see him wander, say Hello. 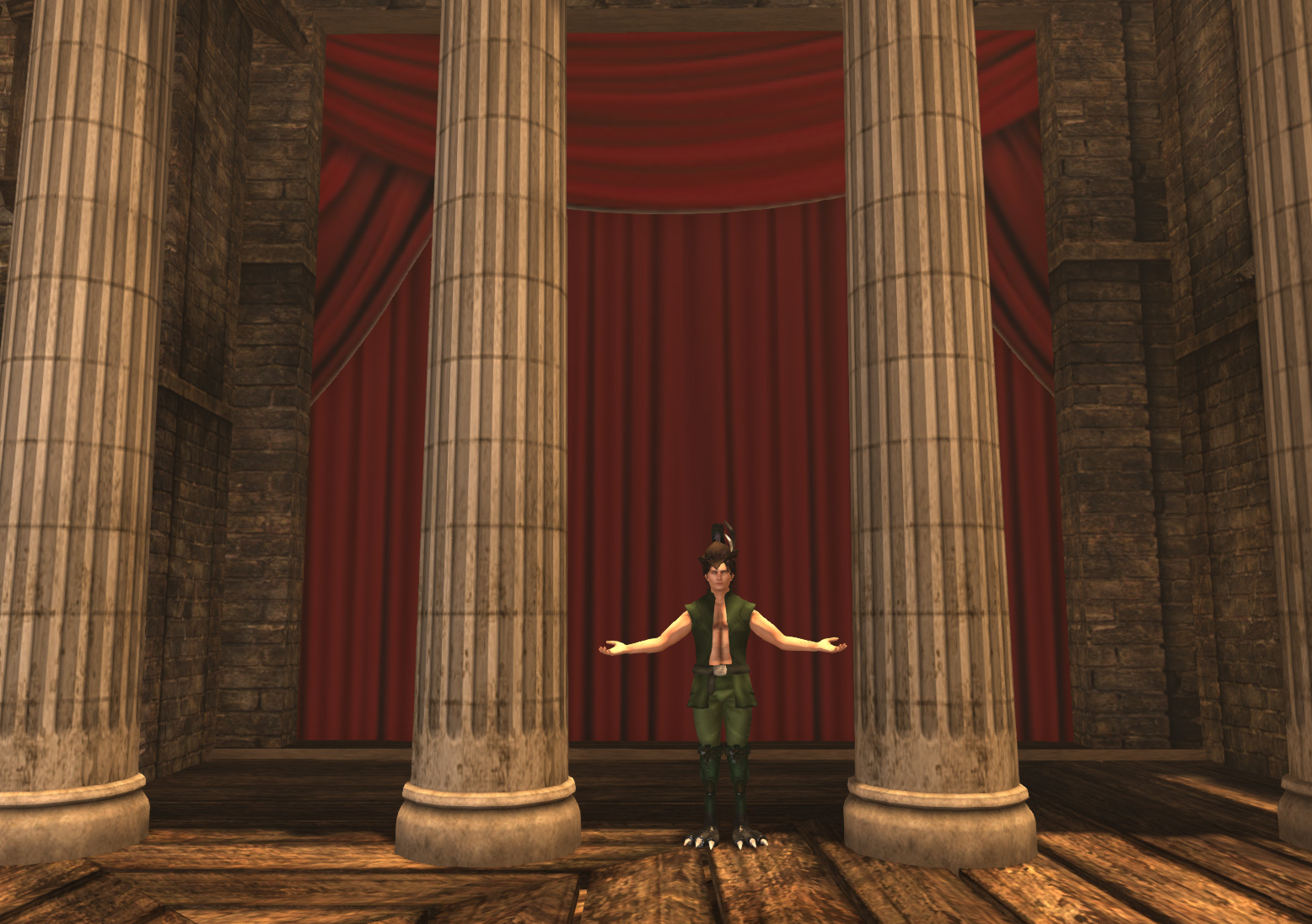 It’s hard not to feel a bit tiny and insignificant around such large and grandiose buildings.  If you find yourself wandering in Lucentia, definitely hit up some of the wonderful merchants there, and help the fight against cancer! 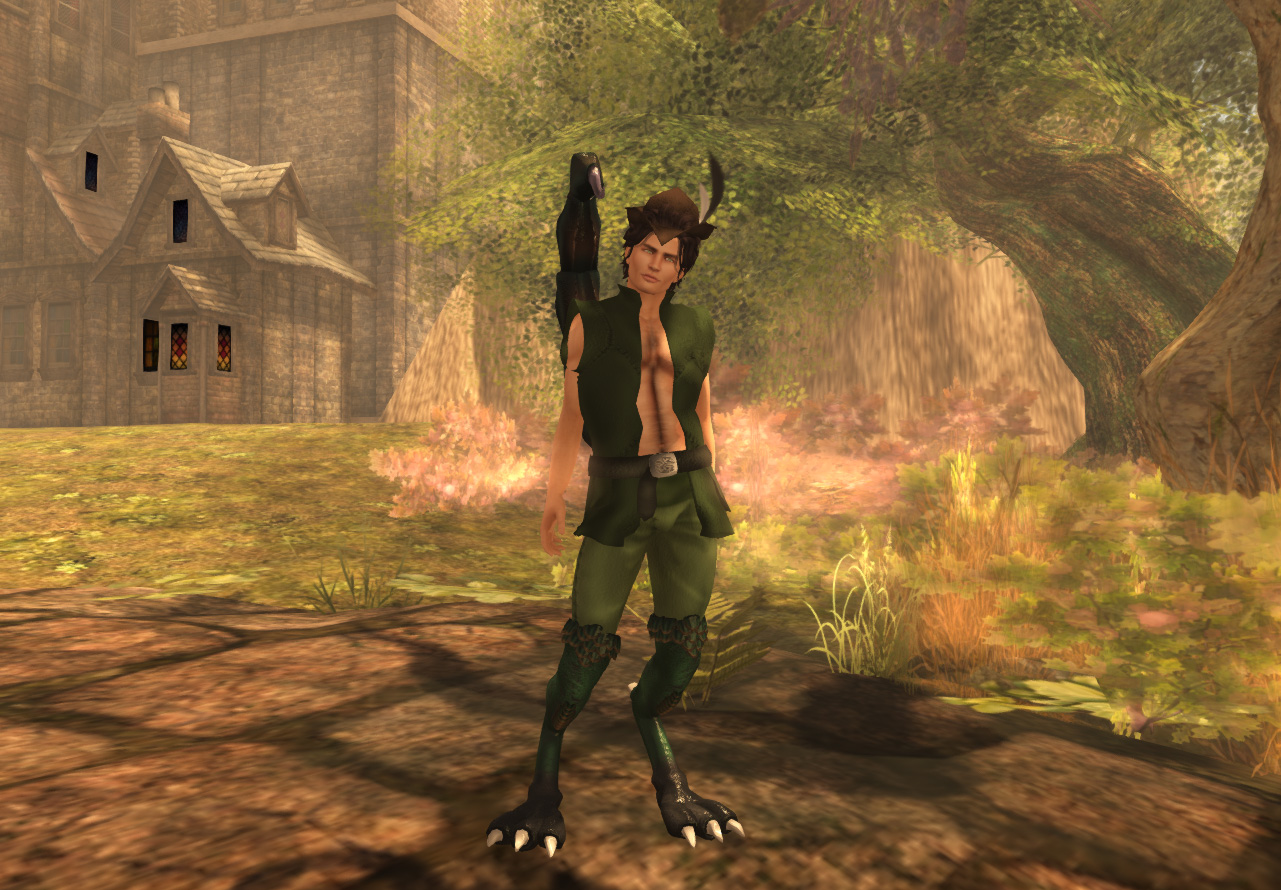 Now that I’ve gained my bearings, I’m off to the next sim. See you there! 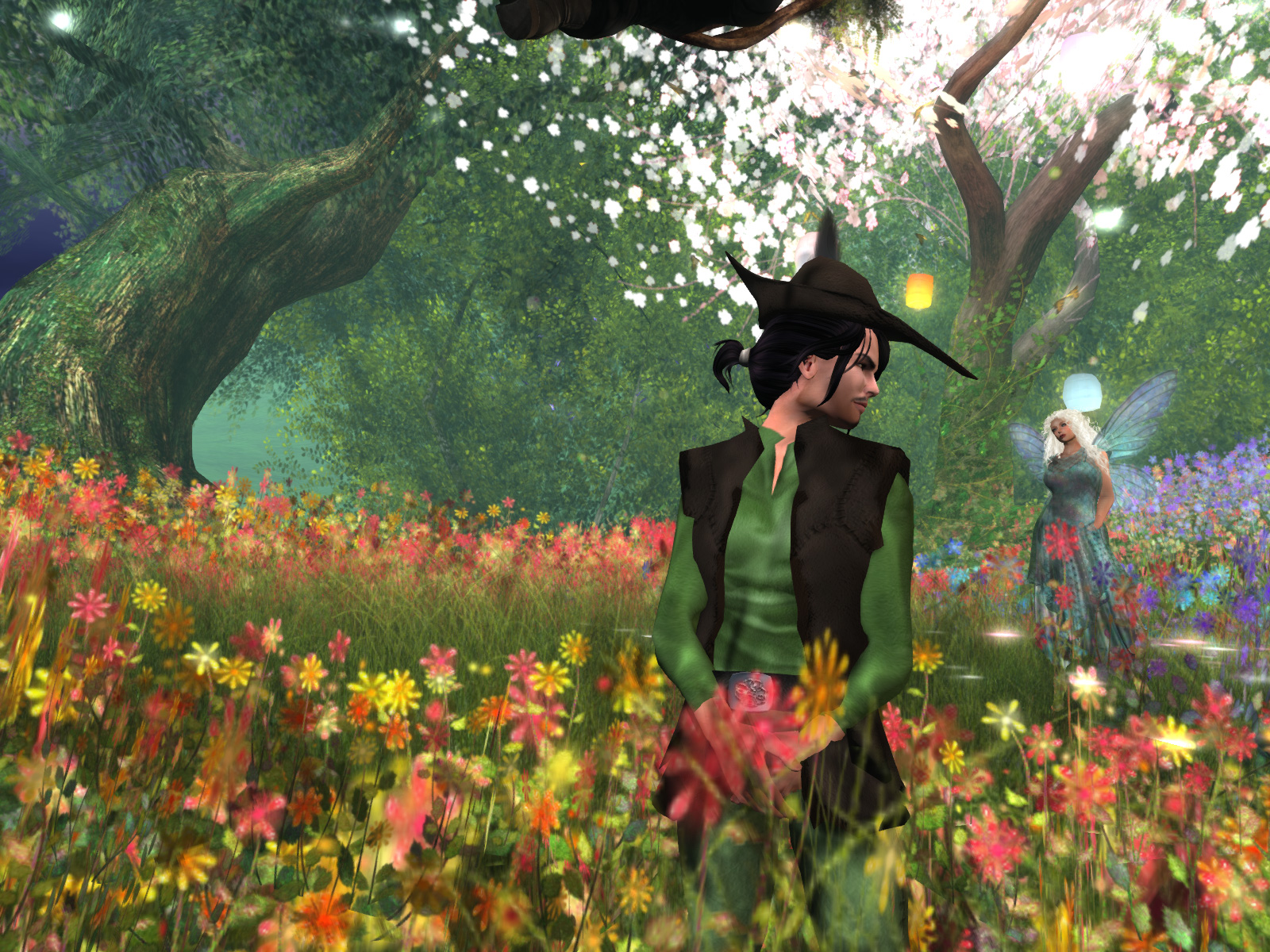 Fantasy Faire is nearly upon us!  This is the premiere event for all things fantasy and Relay for Life.  Avatar Bizarre is thrilled to once again be involved with the Fantasy Faire, and has several items for sale, starting April 21 (Faire opens at 9am, slt).

Robin Hood is a well-known and beloved legend.  Everyone knows he robbed from the rich, and gave to the poor, surrounded by his Merry Men.  He spent a lot of time getting the better of the Sheriff of Nottingham, and also managed to get the girl. 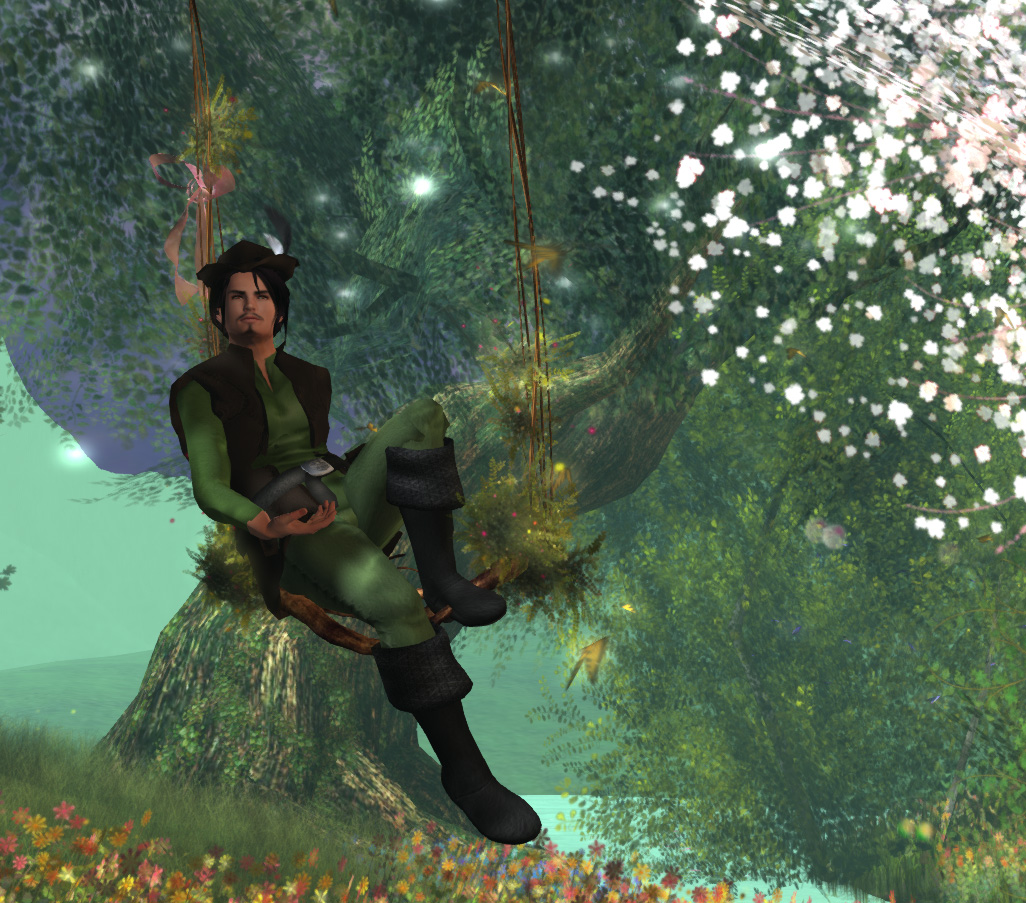 The Robin Hood is a versatile costume for anyone wishing to play in the forests of Merry Olde England, or any forest full of Faerie folk, dragons, and knights in shining armor.  The bandit outfit includes five sizes for the rigged mesh doublet, system shirts and pants in eight colors, plus an OMEGA clothing appliers HUD for mesh bodies (please be sure your body is supported by OMEGA before you buy this outfit).  There’s also a plumed hat, and alpha.

The boots pictured are “Gawain Boots with color HUD”.  These are rigged and unrigged.  All mesh items are materials enhanced for your viewing pleasure. 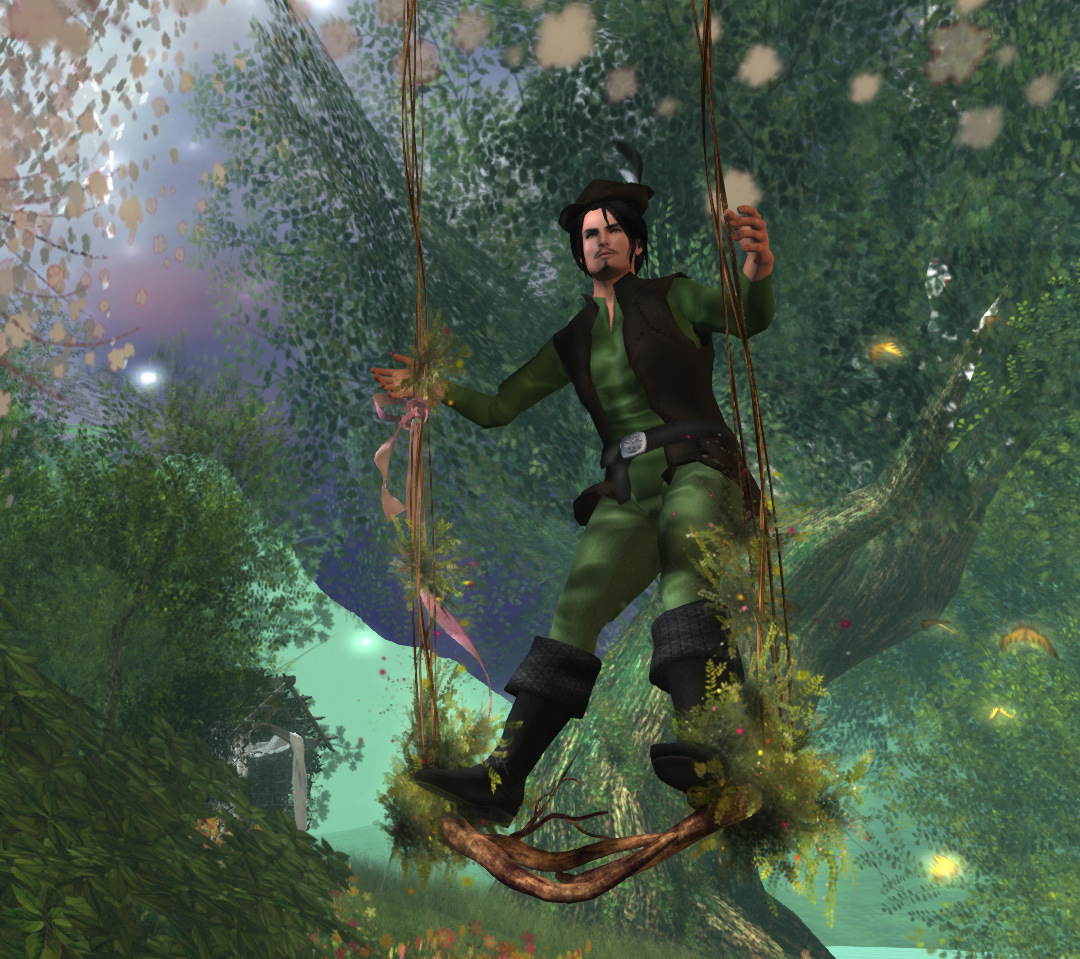 This outfit is available for women, as well.  While at the faire, a portion of the proceeds will go to Relay for Life.  Cost is 375L.  The boots will also be available for 175L. 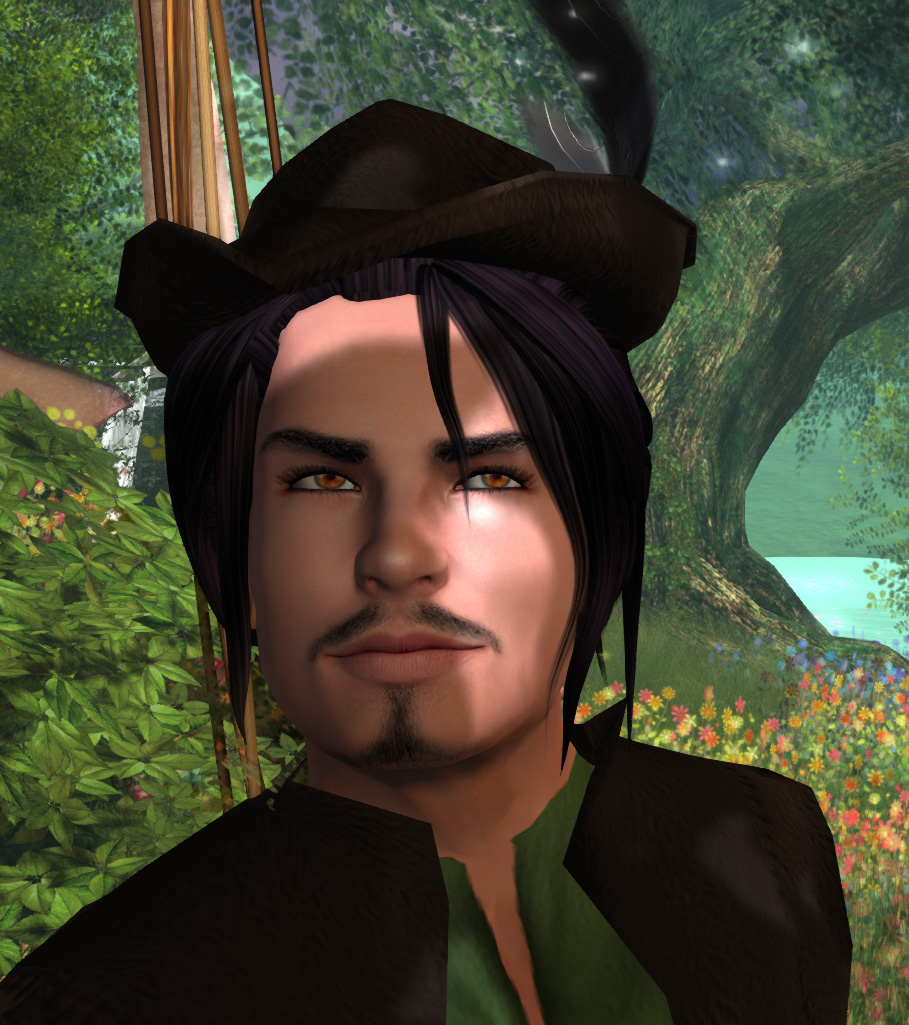 I was approached by Uffda (pictured above) to create a Robin Hood style hat a bit ago.  Since I hate doing things half-assed, we discussed things a bit further and the project turned into a full outfit for Uffda’s Donkey avatar.

It was doubly important to outdo the existing hat in Uffda’s collection because, frankly, the old hat he wore looked like a Freebie Dungeon Noob kind of thing.  We couldn’t have that.  Not when Sir Donkeybutt gargoyles at the local Goth club, and occasionally enthrones himself in my store.

This was a fun project, because I was able to torture my sculpt program into making a bow and arrows, and a quiver, in addition to a fancy hat with a plume.  This outfit is available in five forest-friendly colors … Okay, except for the eye-achingly bright red version that got made because so many guys in Second Life seem to go nuts over red things.  Since my thing is dragons, a heraldic dragon was a moral imperative for the leather stitched quiver.

So, if you have a hankering to rob from the rich and give to the poor, and hang out with a bunch of merry men in a forest, hie thee to yon Marketplace, or to ye olde Avatar Bizarre shoppe, and get yourself outfitted in a color of your choice.