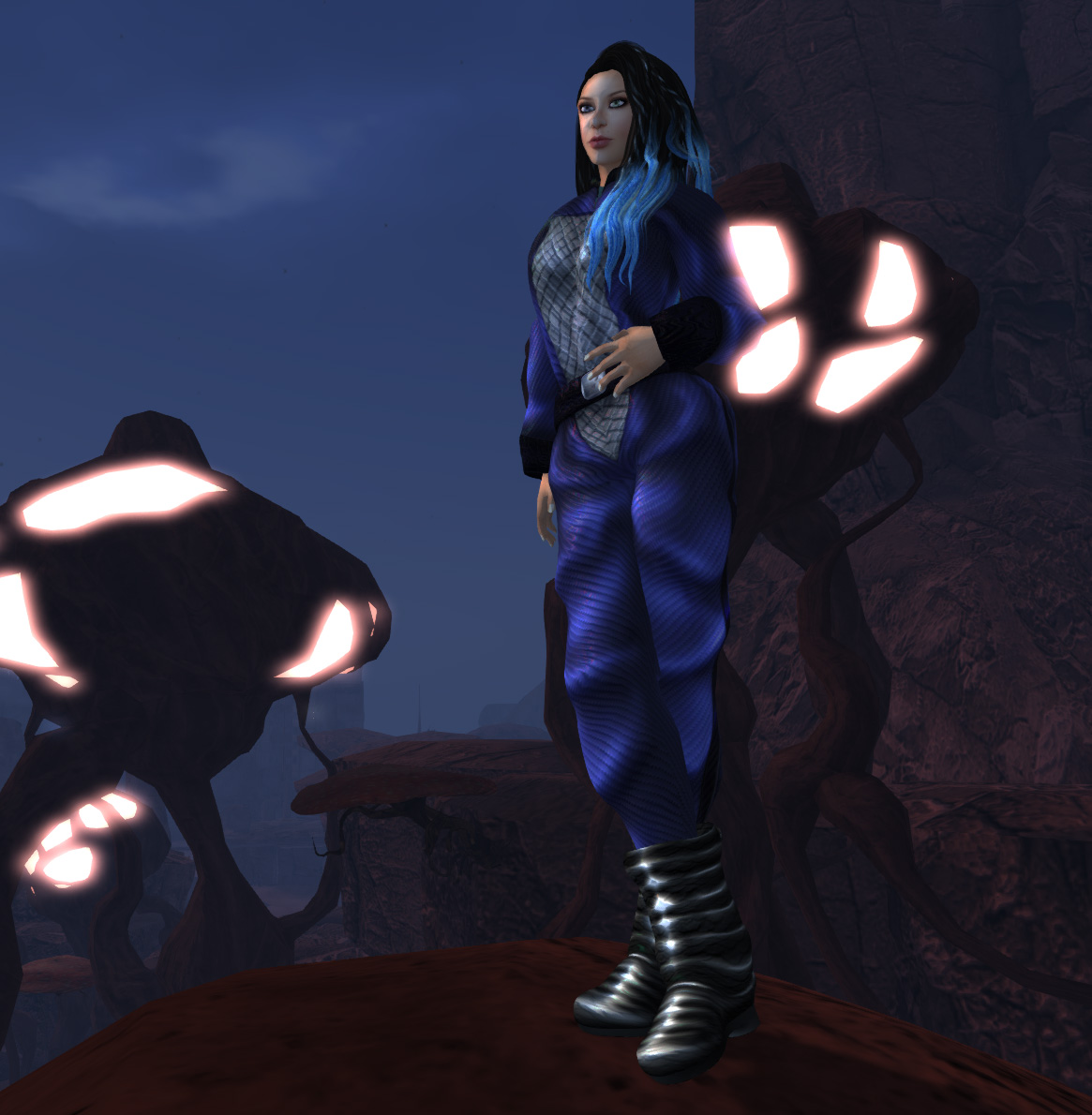 At first, the colonists arrived on Mars as small crews aboard the fleet of rocket ships.  They fled their home world, which was devastated by atomic pollution.  Once properly terraformed, Mars was a popular destination, a new frontier; vast amounts of land for the taking, plenty of room for everyone, except…

They hadn’t counted on Martians getting in their way.  Peaceful though they were, the indigenous people wouldn’t give up their home to the human invasion easily.  Eventually, the conflict became vicious, but who is to say which people would inherit the red sands of Mars.  Men were the aliens, my friends.  But what else could they do?  Earth was no longer inhabitable.  They needed a new home.  It’s simply unfortunate the Martians wouldn’t let us have what they felt was rightfully theirs for the taking… 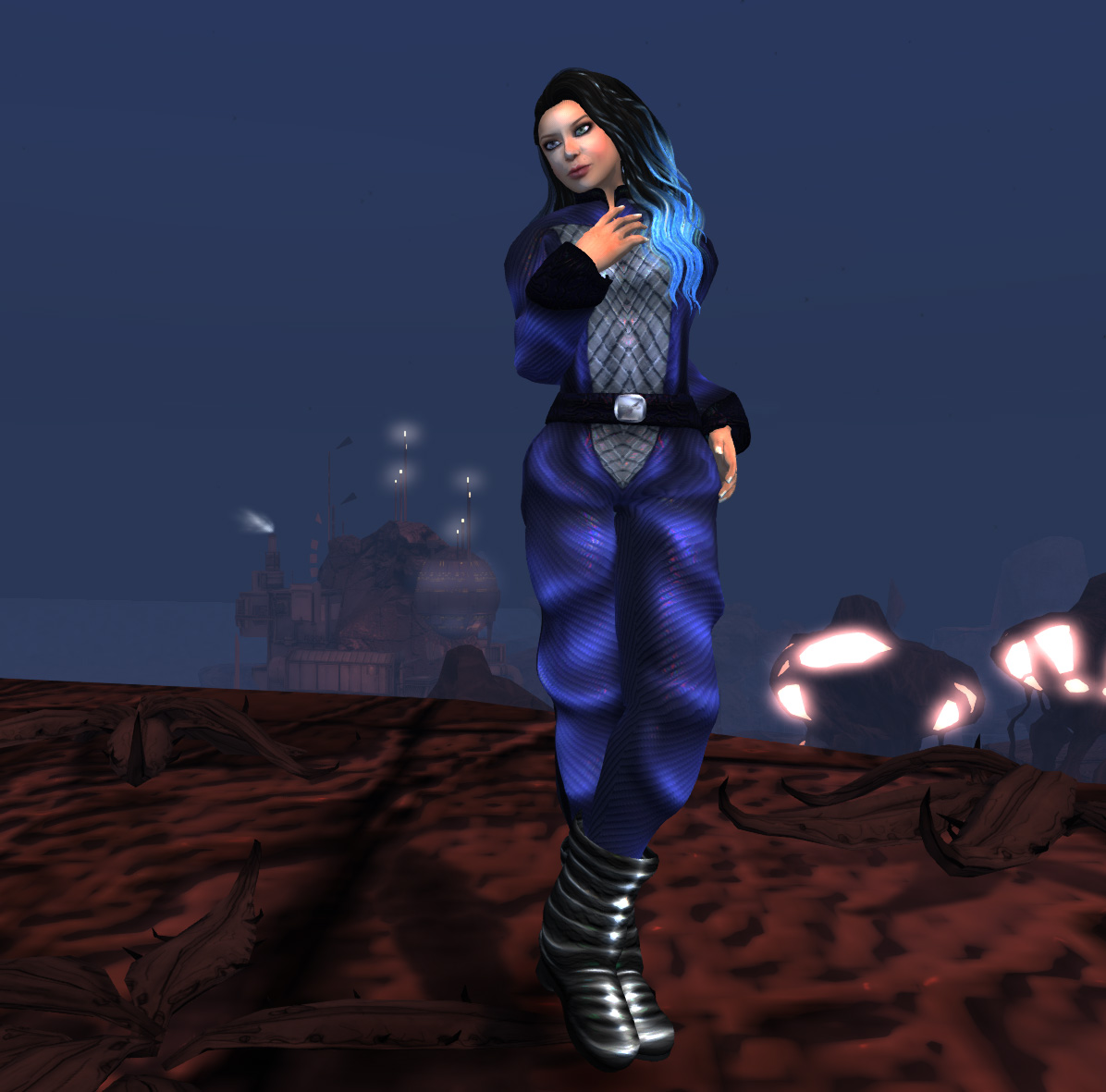 Avatar Bizarre has remade the original Martian Colonist Uniform for female avatars.  Like the male version, this uniform comes in standard sizing, includes a color HUD with seven colors, and is resplendent in opalescent materials shine.  The boots are separate, and also come with a color HUD.  They are unrigged, so you can resize them as needed.

The colors included on the HUD are Red, Green, Teal, Blue, Purple, Black, and White.

The Martian Colonist is available inworld and on the Marketplace.

A Tattered Page is an event, an experiment, an inspiration based on a book, and a thing that happens to novels that you read, re-read, and read again.  I have a copy of Bradley Denton’s Buddy Holly is Alive and Well on Ganymede that is probably held together with love and dreams at this point.  Pages are not only tattered, but falling out.  A Tattered Page: [Citation Needed] is based on a love of books, coupled with the need for inspiration, and metered out with a smidgen of “Oh Hey, A Cool Event!”.

The first round has come and gone.  The next round, based on Ray Bradbury’s The Martian Chronicles, begins on January 7.  It will be held in a central location, rather than in individual stores, this time – for a ton of reasons.  Not least of which is the ability to control the amount of images people need to load when they visit, and suchlike.  The other part of that original experiment (appropriately drawn from Mary Shelley’s Frankenstein) was to have some of the merchants put their items on the Marketplace.  This went down like a lead balloon, exactly as we all thought.  The good news is the stuff was already on the site when the event closed, so it was one less thing for me to do later.

So along comes our buddy Ray Bradbury, and suddenly we’re all off and running to create for this brand new event!  I’ve read The Martian Chronicles many, many times, but definitely needed a refresher course.  Unlike my absolutely stunning model here, I don’t have an eidetic memory.  Quite the opposite, in fact.  So I headed to the library and borrowed a copy.  Besides, the [Citation Needed] part of the event name means one must quote the part of the book that inspired whatever it is you’ve made.

Bradbury is a master of descriptive prose, so getting inspired to make a few things wasn’t too difficult.

This round, held in that aforementioned central location, will also allow merchants to release the items in their respective stores.  The idea is to relieve some of the laggy pressure on a sim, should it end up full of avatars.  There are a few things in Second Life that people have trouble with, and one of those is an event in which you are unable to move, let alone buy the things you like, because of lag.

In any case, the location’s SLurl has yet to be released; we have, in fact, not even set up for it yet.  So the location will be forthcoming soon.  Stay tuned!

You can find relevant information >>here<<.

This sneak preview brought to you by Avatar Bizarre, Literacy, and a nose stuck in Photoshop and Blender for several days.

Are you ready to serve your King and Country in the Royal Navy?  If you are, you can join up and get your very own spiffy uniform!  Sure, you won’t be an Admiral right away, but how long could it take to achieve that kind of promotion, particularly in Second Life?

This uniform is part of a long line of 18th century Royal Navy uniforms available exclusively at Avatar Bizarre.  Meticulously crafted to be as authentic as possible, this uniform comes with everything you need to be an officer and a gentleman in His Majesty’s Royal Military.  Long live King George!  Or at least till the next guy comes along to rule the roost.

Available now at Avatar Bizarre and on the Marketplace.