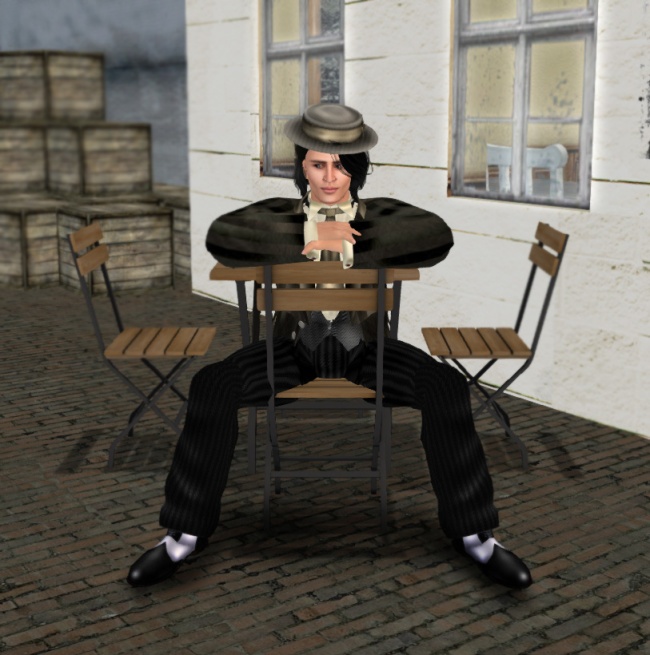 It would appear I suddenly found myself in 1920s Berlin looking for a prat fall where there were none to be had, so I found a little cafe near the canal and sat there contemplating a by-gone era.

Back in the day, movies were in their infancy, providing ravenous audiences with their first real glimpse of cinema magic.  Many a star shone on that silver screen, thrilling us with fantastic adventures, grand romances, dastardly deeds, and making us laugh with some of the greatest physical comedy the world had ever seen.  The master of this domain was Buster Keaton, whose diminutive stature, sad and brooding eyes, deadpan face (which earned him the nick name of “Stone Face Keaton”), and amazing acrobatics, earned him a top spot in movie making history. 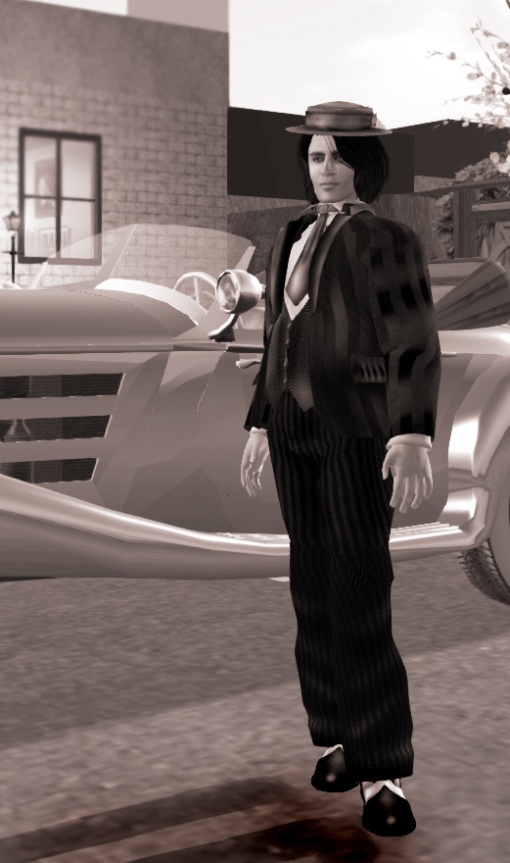 He performed his own stunts, and directed his own destiny as the greatest comedian of the silent film era and beyond.  His films are iconic.  Famous scenes live on in parody and homage.  You can see a bit of Buster in many films, TV shows, and cartoons of today.  You can even see some of his influence on the likes of the Marx Brothers and the Three Stooges.  He was, and always will be, the King of the Prat Fall. 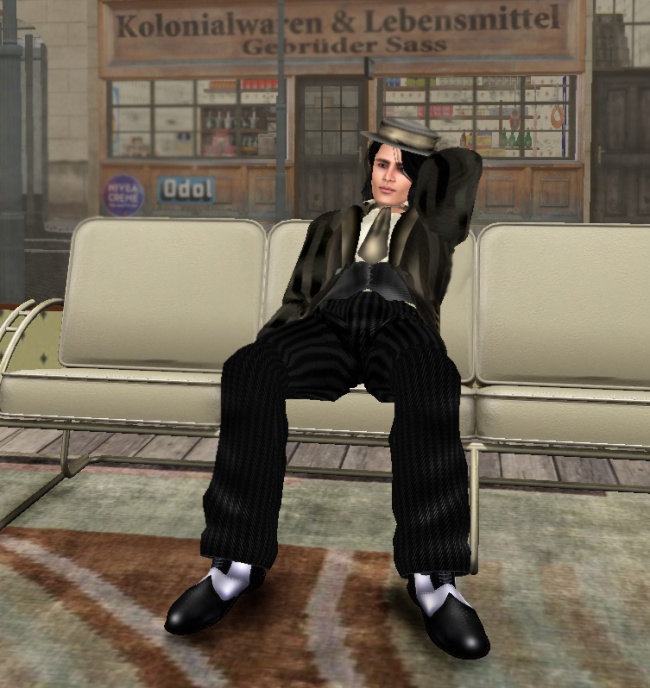 The making of this suit and the trip across the grid looking for 1920s era places to visit has obviously left me a bit exhausted, but in spite of that, here’s my tribute to a Hollywood Legend.

Avatar Bizarre is happy to present the latest in male Vintage clothing for Second Life.  Though my avatar resembles Johnny Depp in Benny and Joon more than Mr. Keaton, I can assure you that this outfit has been painstakingly crafted to be as true to 1920s fashion as we could get it.

From the straw pork pie to the leather wingtip shoes, this outfit is stunning, and will look good on any guy who wants to try on a taste of the Twenties. 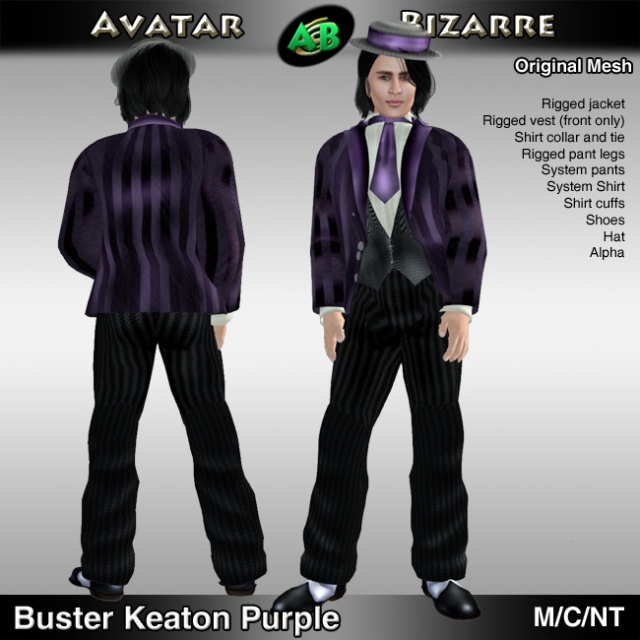 Available in Purple, Black, Sepia, Copper, Patina and Blue, each suit has a rigged striped coat, which should fit just about any male avatar.  There is a demo available, just in case.  Under the coat, you have a rigged mesh vest front (yep, just the front…but what a front!), a system layer shirt, system layer pants, rigged pant legs, mesh collar with tie, and mesh wingtip shoes.  Oh, and don’t forget the hat!  All men of the era wore hats, and Buster was no exception.  He was famous for his pork pie hat, whether it was made of straw, or made of felt. 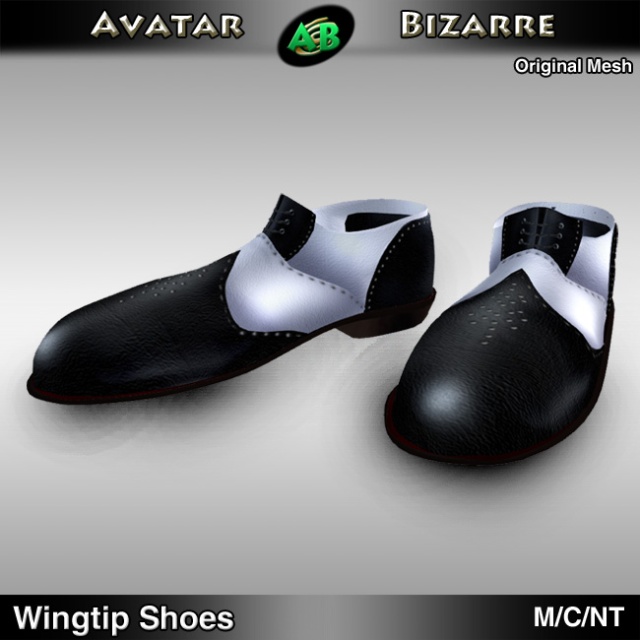 The suit is available in Second Life at Avatar Bizarre’s main store location.
You can also find it in the Second Life Marketplace site.

The cost of the suit, including shoes and everything, is 475L.  The shoes by themselves are 150L.

Horrorfest is a Halloween themed event running October 18 through November 8, and proceeds go to the Epilepsy Therapy Project.

You can find the event here.

Beware!  You will find yourself lost in the woods, a creepy feeling pervading everywhere.  The trees reach out to you with gnarled fingers, brushing the back of your neck.  You jump when a twig snaps behind you.  Heart pounding, you slowly turn around, fearing what you will see…

What confronts you is just too horrible to imagine:  Dozens of gachas containing things that will consume your Linden balance and leave you destitute!  You will find everything from Avatars and Shoes to Eyes and Make up.

Avatar Bizarre is thrilled to be a part of this magnificent and horrifying event.  We have a gacha for eyeballs, naturally. 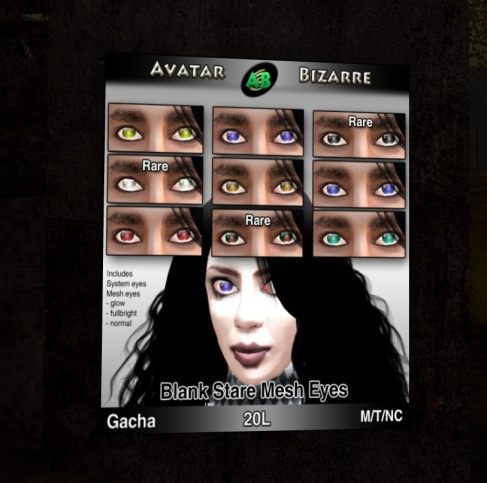 Here’s a little close up:

The rares are Black, White, and Machine.  Good luck!

In other news, there’s a booth attached to all this hulabaloo.  Once you’ve followed the gloomy path of financial destruction across a bridge or two, you will find a large building.  Proceed with caution, as you enter the foyer.  HUNDREDS OF BLOGGER EYES WILL BE UPON YOU!  Tip-toe gently through this chamber to the main floor, where you will find many, many booths full of goodies that you will want to purchase.  Avatar Bizarre’s booth is to the left of the main entrance. 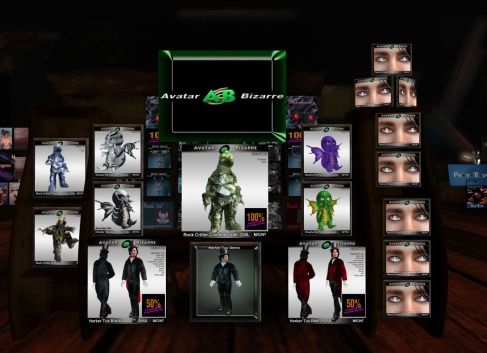 The two Harker Tuxedos, named for Jonathan Harker of Dracula fame, are set to give 50% of the sales proceeds to the charity.  If you buy the Jade Rock Critter avatar, the entire sale goes to the charity!

Of course, there will be other colors available for the Harker Tux after the event. 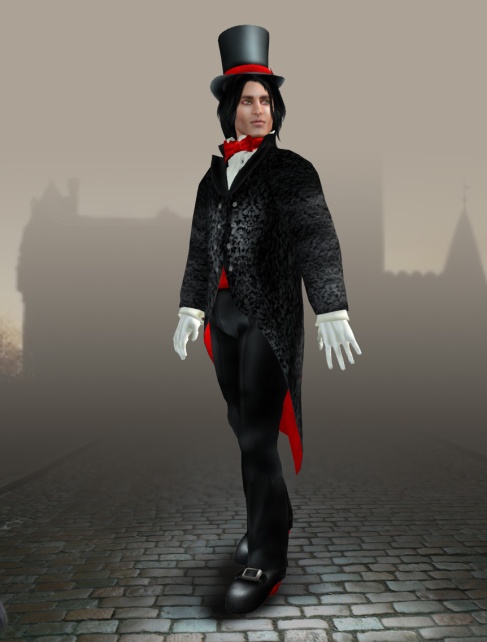 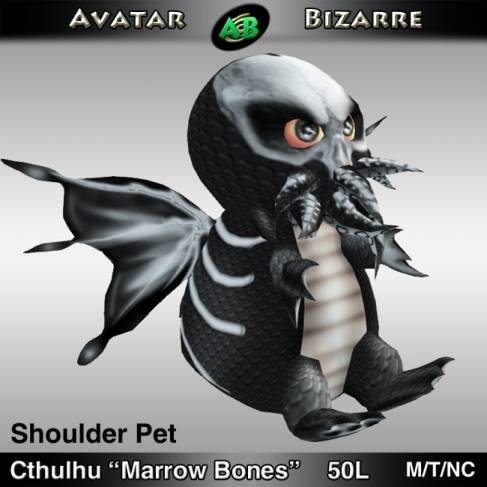 In addition to all this merchandise goodness, there will be events and things and fun and stuff.  Stay tuned! 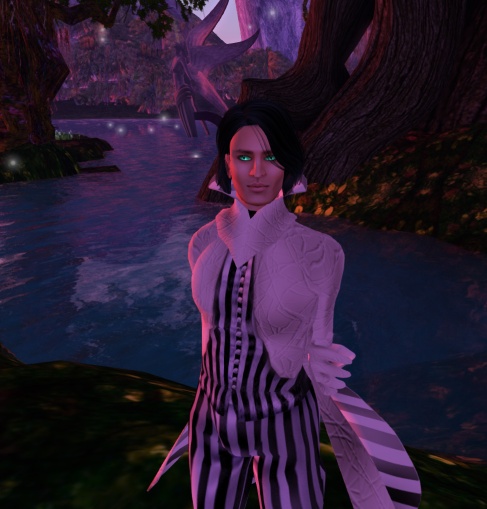 “He took his vorpal sword in hand:
Long time the manxome foe he sought —
So rested he by the Tumtum tree,
And stood awhile in thought.” – Lewis Carroll, Jabberwocky

Once more into the breach, my friends, once more.  Avatar Bizarre has reached a crescendo in the Lewis Carroll Fever Dreams collection in the Vorpal Suit.  As I flew amongst the trees in the Elven forest, a thought struck:  What if the real Jabberwocky were to catch the rumor of all these outfits being named for bits of his poem? 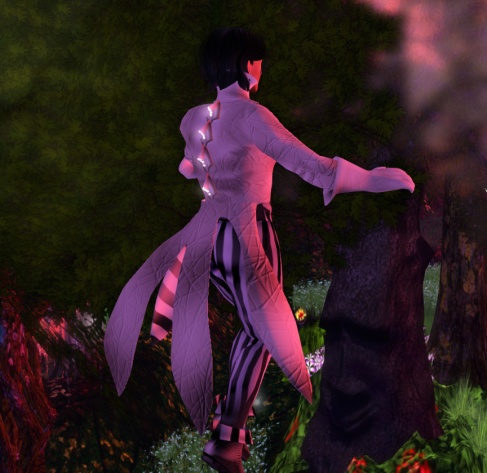 The Vorpal Suit is available in black, white, teal, purple, blue, red, and green, and comes with a few rigged and non-rigged mesh bits that are sure to please even the most aesthetically difficult to impress eyeball.  I should note that while most of the rigged bits should fit just about any avatar on Second Life, the spine may stand out from the slender and lovely backs of many female avatars.  A female version of the spine may be created at a later date, if I gain the courage and the…stuff. 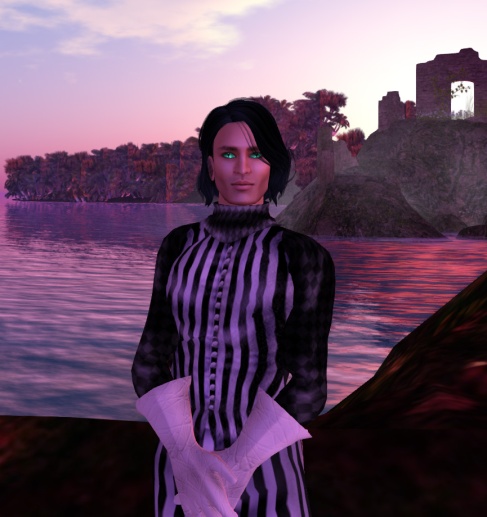 Meanwhile, here’s what you get in every box of vitamin fortified Vorpal parts of this nutritious breakfast:

I hope I haven’t missed anything.  The whole point of this outfit is to give you the most permutations possible, while still being freakishly fantastic. 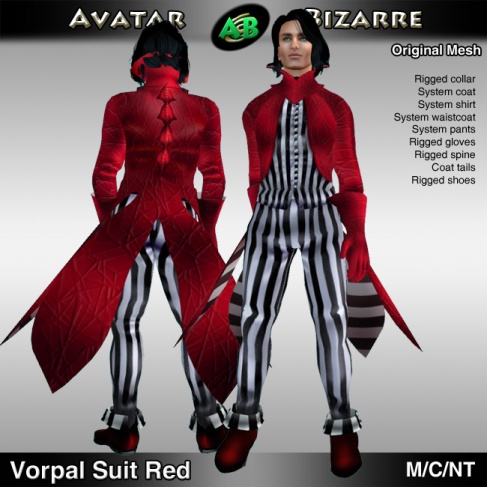 Available inworld and on the marketplace 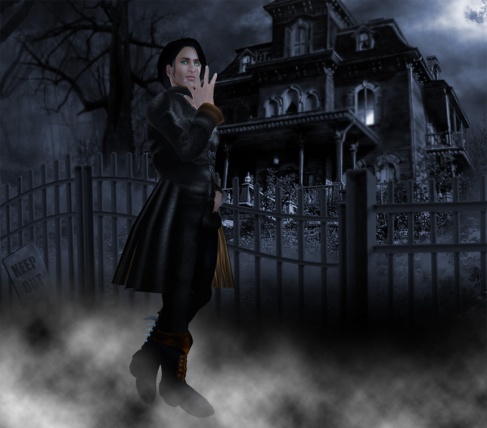 “Beware the Jabberwock, my son!
The jaws that bite, the claws that catch!
Beware the Jubjub bird, and shun
The frumious Bandersnatch!” — Lewis Carroll, Jabberwocky

Once again, the Alice in Wonderland bug has bitten me.  Levers were pulled, and buttons were pressed, and stuff began growing on the spine.  I fell headlong into Blender and clawed my way through its morass of morbitude.  Thus was the Jabberwocky Suit born.

In all honesty, I had been scrambling to come up with a suitable hunt prize for a hunt I forgot I had signed up for.  However, it just so happened that I had started meshing a spinal attachment that begged for something vaguely draconian, and since the Cheshire Cat, Mome Rath, and Madder Hatter had come along to supplement my growing Carroll fever dreams collection, this suit was inevitable.

As a rule, I have not been signing Avatar Bizarre up for hunts because, quite frankly, I got pretty burned out doing hunts in Second Life.  But this is one of those rare special occasions where a hunt gift is warranted and necessary.

Horrorfest, slated to begin on October 18, is a festival fundraiser for the Epilepsy Therapy Project.  Not only will there be bountiful and bootiful Halloween shopping, where proceeds will go to the charity, but there will be DJs and performers bouncing around entertaining folks.  There’s also going to be a gridwide hunt.  Each item is to cost 1L, which is an absolute steal, even if you only keep 2 or 3 items out of 150.  I mean, we’re giving out a whole suit, which would sell for quite a bit more than 1L, or even 150L (which is the maximum number of stores in the hunt).

Close up of the Spine

But, I realize that a lot of folks prefer not to pay for hunt gifts unless they get pictures, so here you go:  The Halloween Edition of the Jabberwocky Suit. 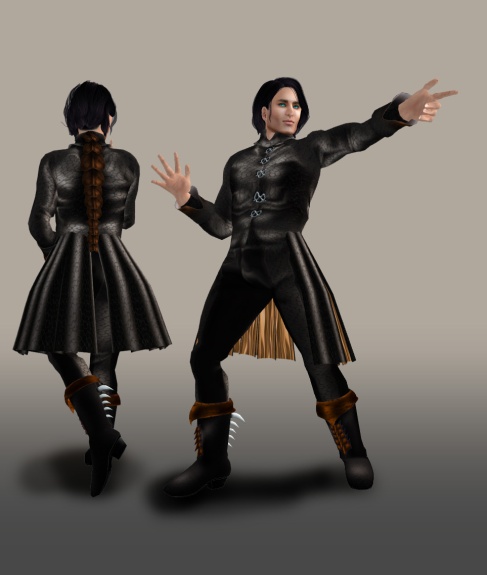 Keep in mind that even though you only see a picture of my avatar wearing this fine outfit, it should fit just about anyone.  The only rigged parts are the spine attachment, and the boots.  The rest can be modified (and copied) and, of course, system layers (the coat and pants) will fit everyone.  This is Gothic and Halloweenish, and perfect for folks looking for something dark and scary.

Once the hunt is over, this suit will be available in an array of stunning colors, including purple, because that’s how Avatar Bizarre rolls.  Till then, have fun with this Stygian black number.

Here’s what you get for your hard-earned linden:
Finely textured and scaly coat with flexi coat tails, a rigged dragon spine and collar, cuffs, pants, and rigged boots!  All of the attachments are original mesh from the diseased mind of Sredni “I Have Misplaced My Pants” Eel.

If you’re feeling especially brave, you can join me (Sred) for a couple of hours of my eclectically Gothic DJing at one of the Horrorfest parties, to be announced.  It’s so secret even I don’t know when it’ll happen!  So stay tuned.