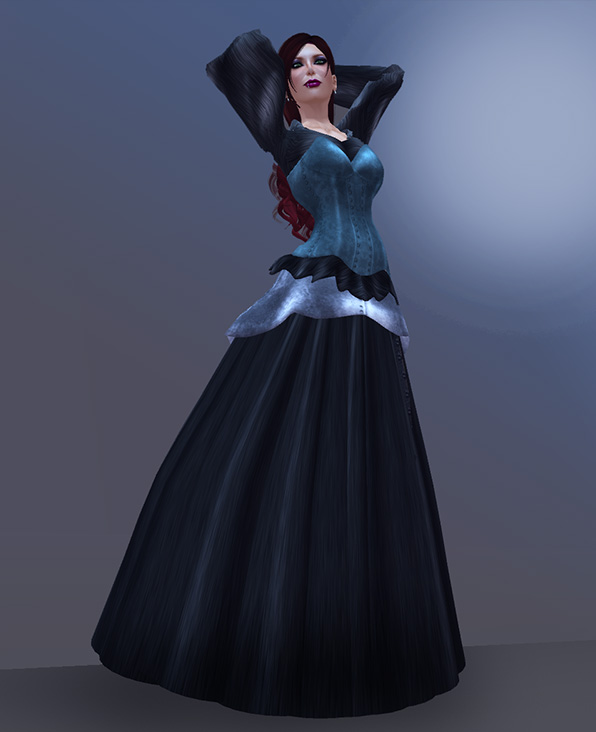 My model mentioned to me a while ago that it was difficult to find decent Steampunk attire in Second Life these days.  I have to admit I was surprised to hear this, since Second Life has always had a large contingent of Steamfolk, Victorians, and various odd dieselpunk people.  You would think with all that wandering blithely around the grid, that it would be a simple affair to hit the shops for a bit of a Steampunk lark to add to your already bulging, straining at the seams inventories. 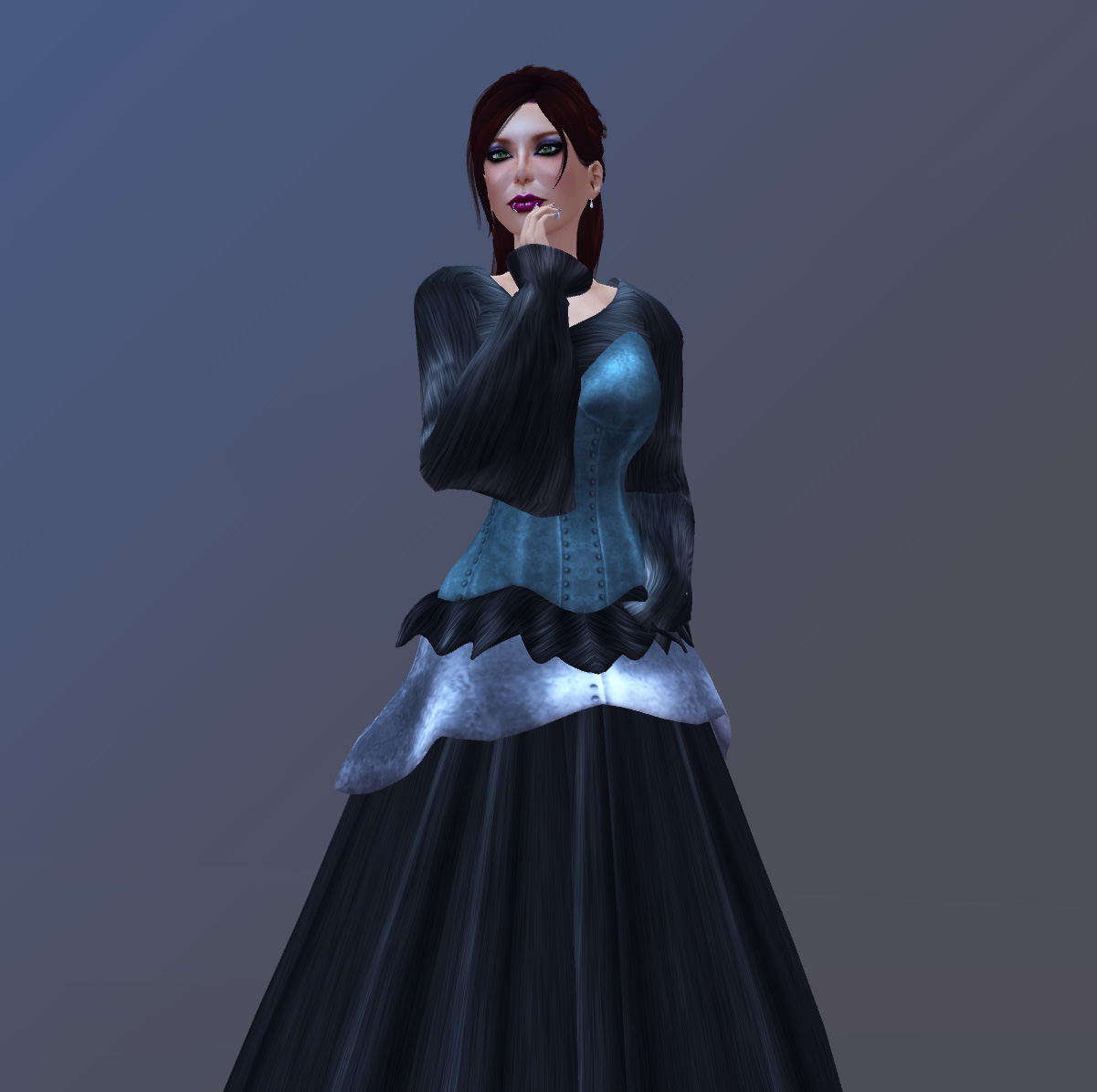 Honestly, who am I to argue these points with someone who clearly shops way more than I do.  So, leaving it to the experts, I set forth on a quest to create a Steampunk gown that LO! contains no gears.  Sorry about that.  But slapping gears on something and calling it “Steampunk” is rather like dying your flannel shirt black and calling it “Goth”.  While that practice is, in theory, correct, it’s pretty cliche.  He said, surreptitiously nudging that gear covered waistcoat under the Axminster. 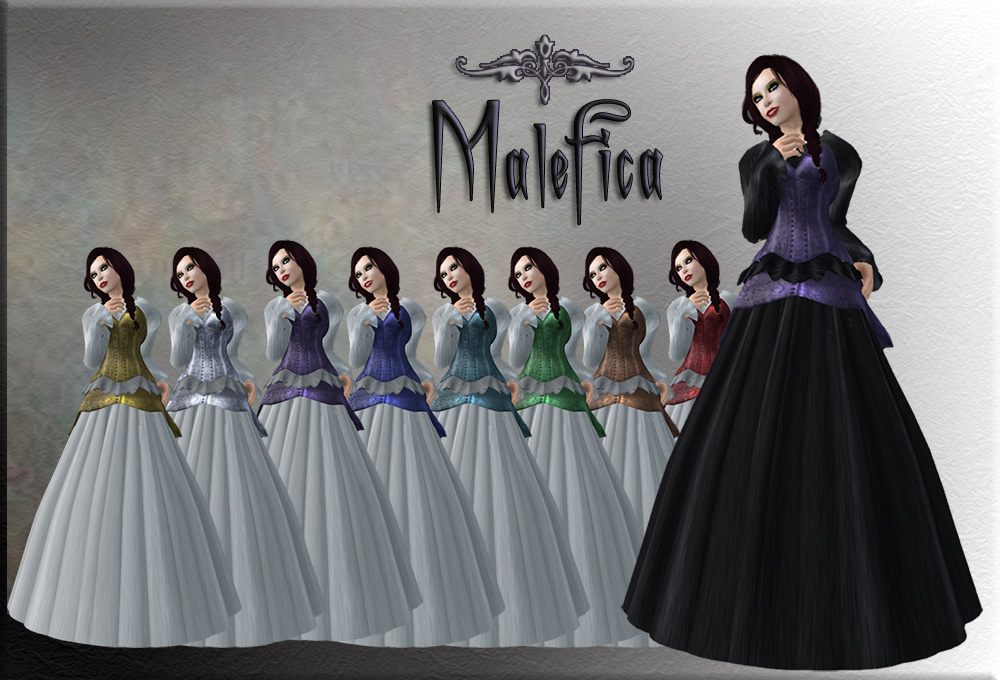 After hammering out a basic design, and giving it the metallic sheen it so richly deserves, the Malefica was born.

Malefica is a complete wardrobe all on its own:  You can wear it as a corset with leather pants (included), a miniskirt with corset, wear it with or without the blouse, with or without the full flexi skirt.  On top of that, you get eight color options for the skirt and skirt bell, two color options for the blouse, and two colors for the skirt, as well as the pants.  How can you go wrong with all of this?

To top it off, there’s an Omega HUD controlling the pants layer for those of you with Omega compatible mesh bodies.  Oh yes, I’ve literally got you covered this time.

Available at the store and on the marketplace now. 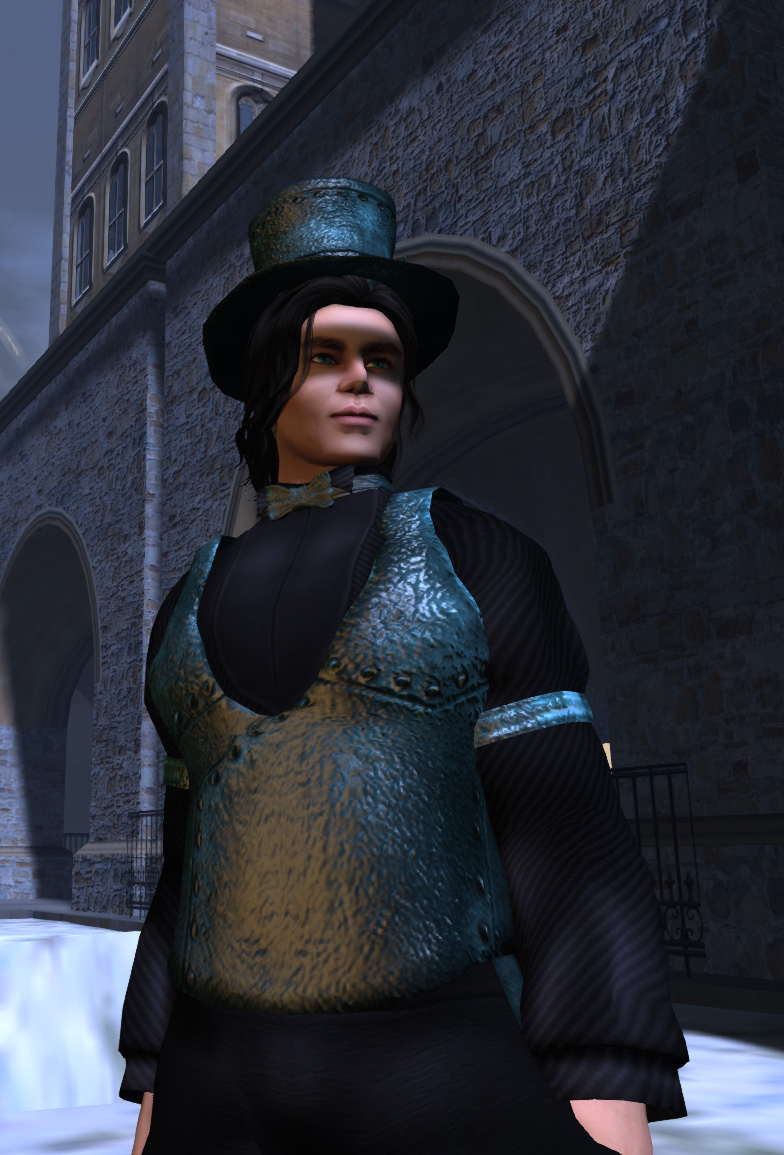 My arrival in the infamous Steamlands was uneventful after such a prolonged absence.  I hadn’t really expected folks to realize I was back, after many long months traveling the world, creating new outfits, and generally enjoying the life of an explorer and gentleman.

I, being of the well-dressed sort, have tailored a semi-formal, yet workaday outfit of finest metals.

My latest fashion hearkens back to a fascination of metallurgy; a love of metals and alloys, and the chemical properties that can be derived from certain materials.  I was wearing my latest invention:  An outfit forged in the searing flames of the Western mountains, hammered flat and pliable, and worked into a useful shield of waistcoat armor.  The shirt, stitched together by sheer force of will, was made of finest carbon fiber.  But what good is a clothier who does not cater to the Gentleperson in us all?  A functional bow tie, a lightweight metal top hat, and metallic garters to hold up the fabric of the sleeves complete this fare. 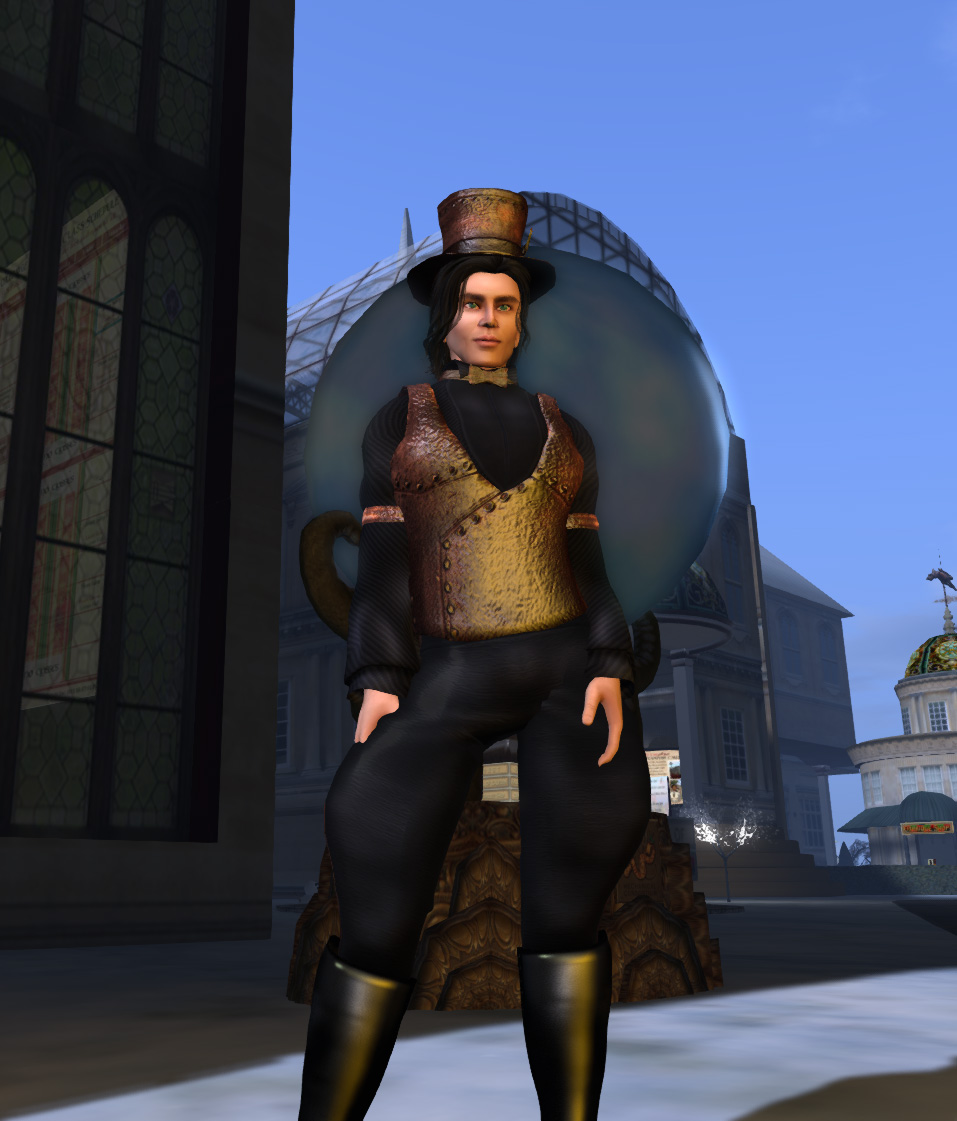 The trousers, a fine fighting pair though they are, were created for those who still wish to practice the fine art of Equestrianism.  Of course, fine riding gear can also be worn while astride your fantastic two-wheeled steam bike, or driving with your lover on a bright country lane in your favorite gyrocopter.  Trousers such as these should be worn with fine Dressage, or other knee high riding boots.

Boots are sold separately, of course, as folks have their preferences. 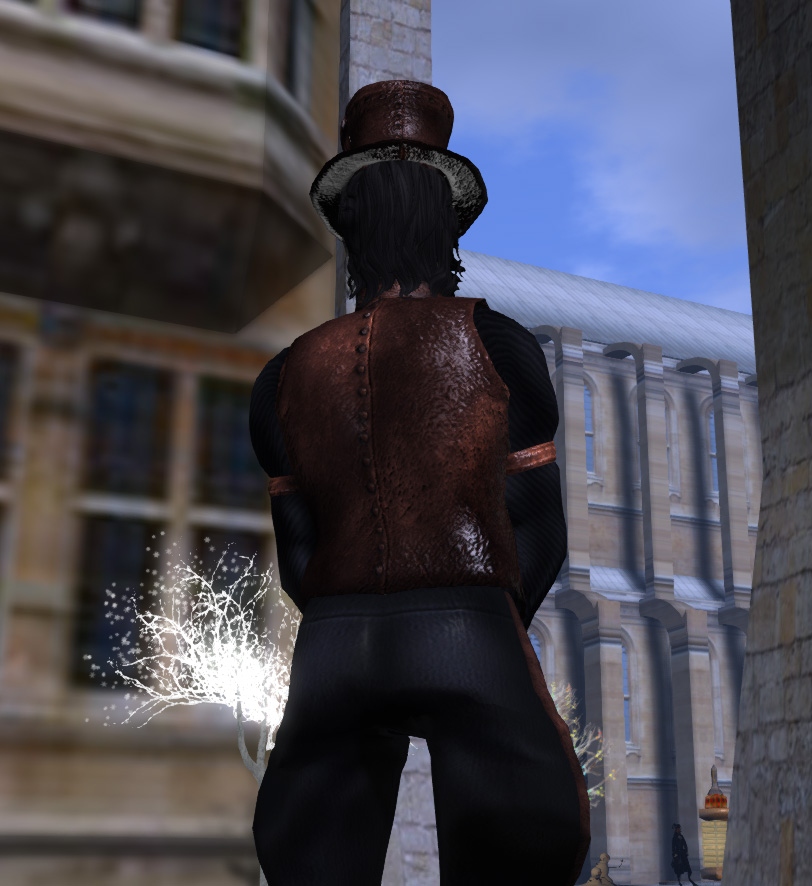 Alas, my tale is nearly at an end, but you will find this, and other new Steam outfits available at Avatar Bizarre very soon.  This outfit, in fact, not only comes with a color HUD (giving you eight metallic colors), but it will be available for daring young women, as well as men.

For the more traditional among you, there is a gentlelady’s gown being released within the next few days as well.  My model insisted upon it, and who am I to argue with the distaff on what would look good on the lovely female form?

Stay tuned, my friends.  More to come in the tale of Avatar Bizarre’s Heavy Metal.  This outfit will be released by Monday, January 28.

It never hurts to be prepared and, in the event of the Second Life Gacha crowd, it’s never too early to start thinking about what to put into a Christmas Gacha machine.  If you are unaware of the ubiquitous Gacha in Second Life, think of it as a sort of old-style drug store gumball prize machine.  You put in a quarter, and you get a random prize.  Sometimes, if you were a kid like me, you’d spend a good bit of your meager allowance trying to get that one prize you coveted; the one prize that never seemed to drop out of the chute, no matter how many quarters you dropped into the coin slot.  Yet, this prize would taunt you from a board in the glass face of the prize machine, urging you on, and cultivating a love of gambling that may follow you into adulthood and Las Vegas.

If you still don’t know what I’m talking about, then I’m sad, and will now crawl into the fetal position for feeling old beyond my years.

Gothmas by Gaslight is a shopping event in Second Life.  It started off as a hunt, where people would search for hours to find various hunt objects hidden in stores across the grid.  But, as hunts have become a little passe, and more than a huge nightmare for organizers, the powers that be turned Gothmas by Gaslight into something much, much better.

Every year, the Cursed sim prepares itself for this wondrous event.  Merchants sign up to have that special spot in the sim where they can hawk their wares.  Of course, those wares include the insidious Gacha.

Avatar Bizarre is happy to announce a sneak preview of ten pairs of boots in jeweled Gothic hues, to be placed in the Gacha, and sold for 25L per play.  The Vernian Boots are transfer, so if you end up with a dozen pairs of green boots, you can trade them for other things with folks, give them to a best friend, or even sell them at a Second Life yard sale.  Whatever you end up doing with your new leather SteamGoth Boots of Awesome, I hope you like them.  A lot.

As Christmas marches inexorably at us, ready to slap us with good cheer, peace on earth, Santa, and all that other stuff, I will be unveiling more goodies to be debuted at Gothmas by Gaslight.

Meanwhile, feel free to visit Avatar Bizarre inworld for all of your fantasy, historic, Gothic, and Lovecraftian needs.

You’re a mean one, Mr. Grinch, but at least you can be a mean one in true Victorian style this year.

Avatar Bizarre is happy to announce the arrival of four brand new suits to help you get into a festive mood.  Of course two of them come in bright Christmassy Red and Green, because it’s Christmas, the color of holly and poinsettia, and Santa Claus.  The other two suits are a splendid touch of color in Purple and Gold, and Blue and Silver.

Each suit includes everything you need to achieve your spectacular holiday look including the hat with a sprig of holly, a pair of shoes, and a formal cravat.  As with most things at Avatar Bizarre, everything is modify and copy so you can easily resize things to fit your own avatar without worry.

Available at the Marketplace and inworld.

A whole slew of Winter holidays is fast approaching.  It gets pretty busy for most people, and those in Second Life are no exception.  There will be many, many holiday themed hunts, mostly centering around your typical red and green Santa or Candy Cane motif.  There’s nothing wrong with that, but what about the Virtual Goth?

Fear not, my minions.  Gothmas by Gaslight is an annual tradition in the Gothic Second Life world.  It originally started out as a grid-wide hunt, but has since evolved into a shopping tour.  Each store involved will be creating at least one brand new outfit, and quite a number will be providing Gothmas gacha prizes.

Avatar Bizarre is, once again, playing a part in this Gothic Extravaganza.  Although I will not have a Gacha (there simply isn’t enough time, what with Real Life rearing its ugly head at me with a vengeance and all), I will be releasing several new outfits.

The Julenisse is a range of “His n’ Hers” outfits that will also be available to Petite Mesh avatars.  The Julenisse, inspired by the Scandinavian Christmas Pixie, will be available in six colors:  Blue, Black, Purple, Red, Green, and Teal.  Of course, the picture shows the full sized avatar’s gown.  In coming days I will be completing the Petite version, and a full suit for the male avatar (and petite).

Then hopefully inspiration will strike long enough for me to come up with a Twisted Krissmus outfit, because you can never have too many Gothic sales events, or Twisted happenings in your life.